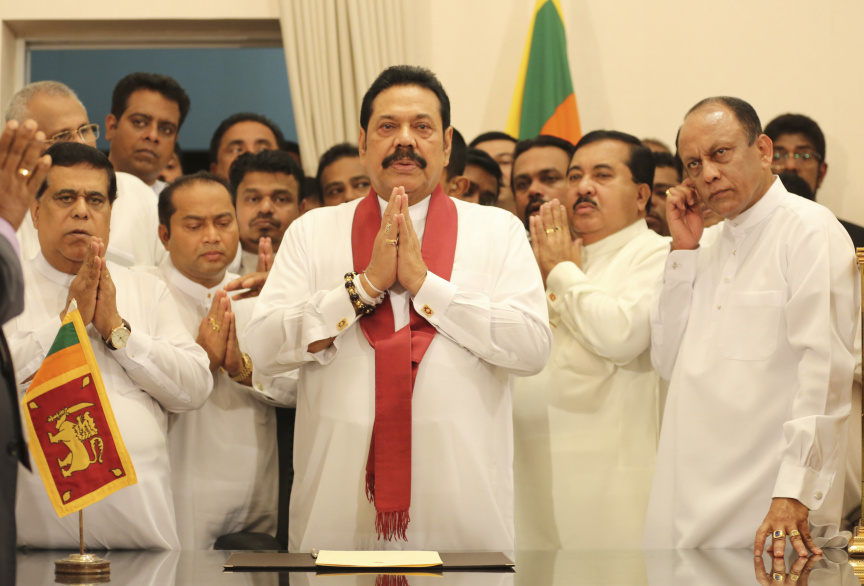 COLOMBO, Sri Lanka (AP) — Sri Lanka's president swore in a new Cabinet on Monday despite a warning by Parliament's speaker of a possible bloodbath if lawmakers are not summoned immediately to resolve a deepening political crisis following the president's sacking of the prime minister.

President Maithripala Sirisena sacked Wickremesinghe and his Cabinet on Friday and replaced him with former strongman Mahinda Rajapaksa. On Saturday, Sirisena suspended Parliament in an apparent move to give Rajapaksa time to muster enough support to survive any no-confidence vote.

Sirisena's moves have triggered a power struggle and some observers say it has created a constitutional crisis.

Sirisena proceeded on Monday to swear in 12 Cabinet ministers, one state minister and a deputy minister. The rest of the ministers will be appointed later, presidential spokesman Dharma Sri Ekanayake said.

Jayasuriya said the crisis should be quickly resolved by Parliament and added that he has already asked Sirisena to summon lawmakers.

"Some are trying to resolve this matter in the streets. If that happens, a bloodbath could occur," he said.

Two people died and one was wounded in a shooting Sunday at the Petroleum Ministry, the first violence related to the political turmoil.

Arjuna Ranatunga, who was petroleum minister under Wickremesinghe, said one of his security guards opened fire when Rajapaksa supporters mobbed him and protested his entry to the ministry.

On Monday, police arrested Ranatunga, a cricketer-turned politician, in connection with the shooting, state television said. His security guard was arrested Sunday. Ranatunga, who was the captain of the Sri Lankan team which won the 1996 World Cup, was later released on bail.

Wickremesinghe said Monday that "Parliament can decide who has the majority. We can all abide by it."

"At the moment, there is a vacuum and constitutional crisis. This is why we are asking Parliament to be summoned," he said.

Sirisena said he sacked Wickremesinghe mainly because of the alleged involvement of a Cabinet minister in a plot to assassinate Sirisena. He did not reveal details of the alleged plot.

Sirisena's supporters have talked for weeks about an alleged plot, but Sunday was the first time Sirisena commented publicly about it.

A police informant named Namal Kumara told reporters on Sunday that Wickremesinghe and a Cabinet colleague, former army commander Sarath Fonseka, were behind the alleged plot.

Police are investigating the reports of a plot, but no arrests have been made.

Hundreds of Wickremesinghe supporters continued to gather outside the residence on Monday for the third consecutive day, denouncing Sirisena and Rajapaksa. Buddhist monks performed religious rites to invoke blessings on Wickremesinghe.

Tensions have been building between Sirisena and Wickremesinghe for some time, as the president did not approve of economic reforms introduced by the prime minister. Sirisena was also critical of investigations into military personnel accused of human rights violations during Sri Lanka's long civil war, which ended in 2009.