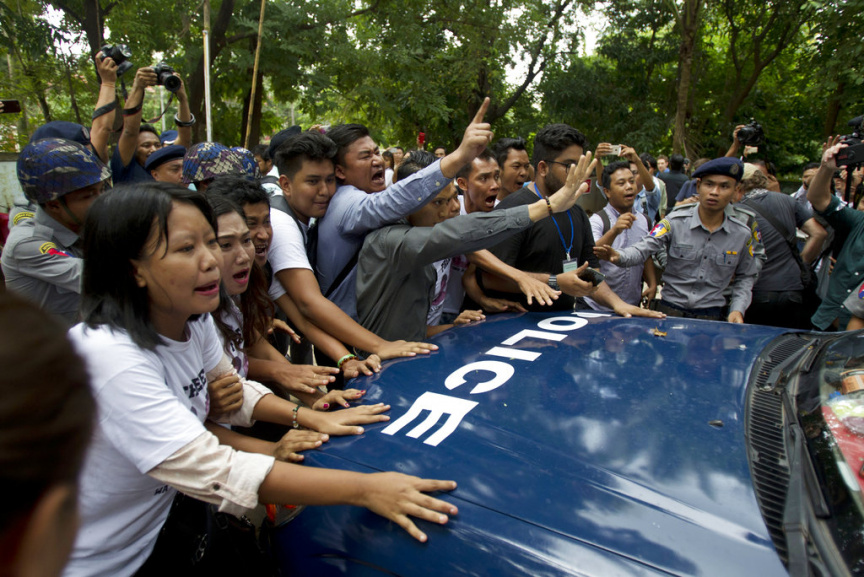 YANGON, Myanmar (AP) — The Latest on the conviction of two Reuters reporter in Myanmar for illegally possessing official documents (all times local):

In her first day on the job, new U.N. human rights chief Michelle Bachelet says she was "shocked" at the seven-year prison sentences handed down to two Reuters journalists in Myanmar, calling the trial a "travesty of justice" and urging their immediate release.

Wa Lone and Kyaw Soe Oo were convicted and sentenced Monday of violating a colonial-era law on charges of illegally possessing official documents.

The journalists, who were reporting on a brutal crackdown on Rohingya Muslims, testified that they did not solicit or knowingly possess any secret documents.

Bachelet said of the reporters: "I think the information they gave on the massacre was of public interest."

"So I will urge the Myanmar government to release them as soon as possible, immediately," the former Chilean president said.

"I was shocked today in the morning, when I woke up and learned that these two journalists from Reuters have been imposed a sentence of seven years of jail."

Germany's foreign minister says he was dismayed by the conviction of two Reuters reporters in Myanmar on charges of illegally possessing official documents.

Foreign ministry spokesman Christoph Burger told reporters in Berlin on Monday that the verdict was a blow to press freedom in Myanmar.

Burger said Myanmar's crackdown against the Rohingya minority in the country's western state of Rakhine, which the journalists were reporting on, should be investigated.

He said Germany would coordinate its response with other European Union countries.

The journalists testified that they did not solicit or knowingly possess any secret documents. They were sentenced to seven years in prison.

Wa Lone and Kyaw Soe Oo were convicted Monday of violating a colonial-era secrecy law and sentenced to seven years in prison. They were arrested while reporting on Myanmar's brutal crackdown on Rohingya Muslims.

British Ambassador Dan Chugg, who was in court for Monday's verdict, said the case has "struck a hammer-blow to the rule of law in Myanmar."

He said diplomats who attended the trial believe the judges ignored evidence and Myanmar's laws. The journalists testified they did not solicit or knowingly possess any secret documents, and a police officer who testified his commander had ordered documents be planted on the journalists was subsequently jailed for a year.

Chugg called for the journalists' release.

The U.S. says the conviction of two Reuters reporters in Myanmar is "deeply troubling for all who support press freedom and the transition toward democracy."

In a statement, the U.S. Embassy in Yangon said "the clear flaws in this case raise serious concerns about rule of law and judicial independence in Myanmar, and the reporters' conviction is a major setback to the Government of Myanmar's stated goal of expanding democratic freedoms."

It called for their immediate release.

A court in Myanmar has sentenced two Reuters journalists to seven years in prison for illegal possession of official documents, a ruling that comes as international criticism mounts over the military's alleged human rights abuses against Rohingya Muslims.

Wa Lone and Kyaw Soe Oo had pleaded not guilty to violating the colonial-era Official Secrets Act, punishable by up to 14 years in prison. They contended they were framed by police.

Monday's verdict was postponed from a week ago.

The two journalists had been reporting last year on Myanmar's brutal crackdown against the Rohingya in the country's western state of Rakhine.

Investigators working for the U.N.'s top human rights body said last week that genocide charges should be brought against senior Myanmar military officers over the crackdown.