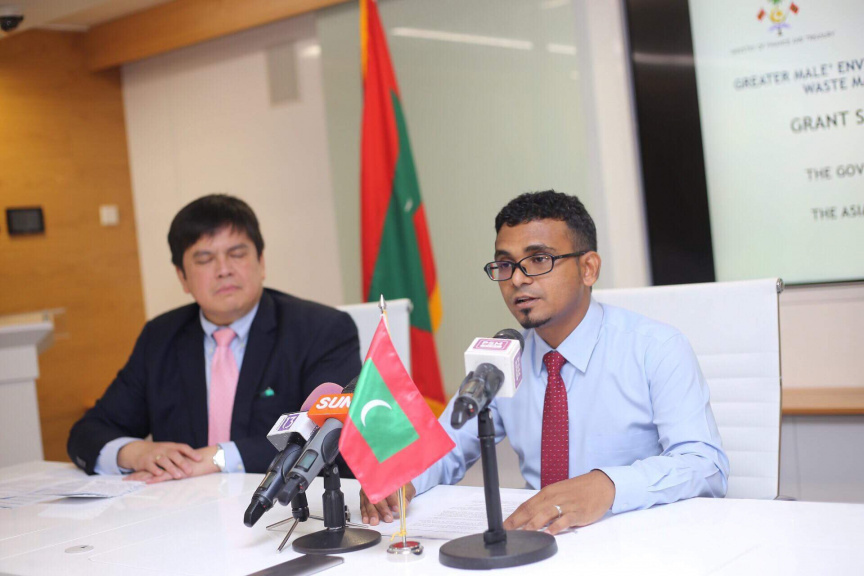 Asian Development Bank (ADB) and the Maldivian government has signed the agreement for a USD 33.07 million grant to establish a waste management system for sustainable development and environmental protection in the Greater Male’ Area.

The agreement was signed by Minister of Finance of Maldives, Ahmed Munawwar and ADB’s Regional Cooperation and Operations Coordination Director, Ronald Antonio in a function held at the Ministry of Finance this Thursday.

ADB’s grant will kick off the first phase of the Greater Male’ Waste Management Project announced by the Maldivian government.

Munawwar said the project is worth USD 160 million, and that the USD 125 million needed for the second phase of the project has been arranged by another financial institute like ADB.

Minister of Environment and Energy, Toriq Ibrahim, who also participated in the function, said work on the project as already begun with cease in burning garbage at Thilafushi, and the collaborative work by WAMCO and MNDF to put out fires at the Thilafushi garbage dump.

Initiatives under the project:

Enhancement of the waste management system in the Greater Male’ Area

Minister Toriq said six incinerators have been brought to Thilafushi under phase one of the Greater Male’ Waste Management Project. He said the Thilafushi garbage dump will be cleared out and the garbage collected and safely disposed.

He also said that 15 hectors of land for phase two of the project has now been reclaimed in a MVR 105 million project. He said additional incinerators will be placed in the area as well.

He said projects under the second phase will be tendered in October.

ADB says it expects the Greater Male’ Waste Management Project to benefit 216,000 people, which is half of total population of the Maldives.

ADB to increase aid to Maldives