5 of the biggest takeaways from Comic-Con 2018 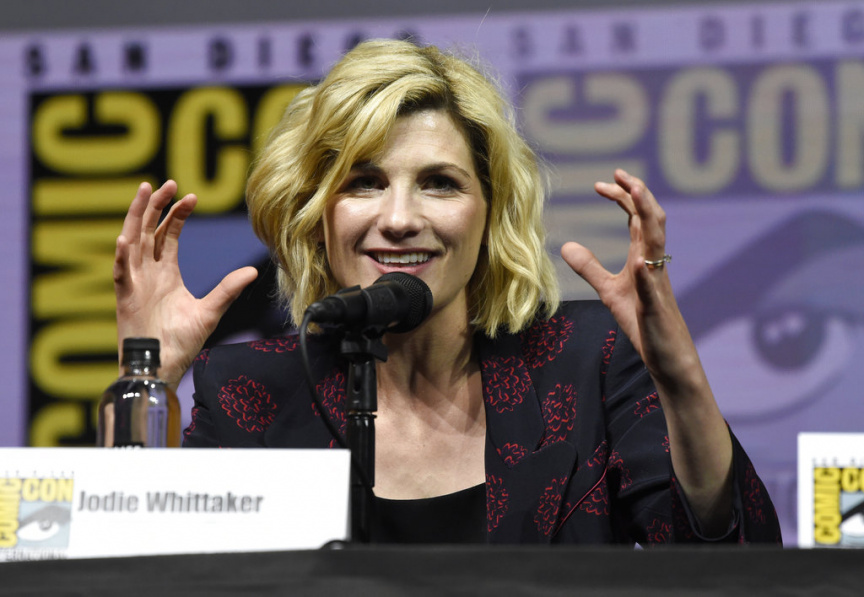 LOS ANGELES (AP) — San Diego Comic-Con 2018 ended Sunday as workers stripped the branding off the buildings, windows, buses, elevators, escalators and every other square inch of open space in the city's Gaslamp District. Weary attendees squeezed in one last thing before heading home with bags of merchandise, sore feet, some sunburns and fewer dollars in their bank accounts.

The four-day comic book convention attracts some 130,000 souls every year who come for the swag, the parties, the exclusives, the stars and the wild experience of being with like-minded, and often costumed, pop culture fanatics. It has the potential to be the epicenter of geek culture — and for brands and studios, a valuable litmus test for what might pop and what might fizzle in the years to come.

Here are a few of the biggest takeaways from this year.

After other big gatherings like the Sundance Film Festival and the Cannes Film Festival made overtures to explicitly address harassment issues and detail procedures for how to report, Comic-Con, which has been criticized over the issue in the past, chose to defer to its standing Code of Conduct and partnerships with local law enforcement and private security companies. Programming director Eddie Ibrahim didn't use his platform introducing nearly every Hall H panel to mention the topic at all.

For many female attendees, harassment at conventions is nothing new, but some noted an improved atmosphere. "I have seen a difference," said Paige Campbell, a 22-year-old from Chicago. "I have been cosplaying for seven years. It's been getting better, but we still have a long way to go."

Also, after Chris Hardwick stepped down from moderating panels following misconduct allegations (which he has denied), he was replaced in many instances with women, like Yvette Nicole Brown and IGN's Terri Schwartz.

There was some news out of Comic-Con — television's first transgender superhero will appear on the CW's "Supergirl" in Nia Nal (played by Nicole Maines), the beloved animated Star Wars series "Clone Wars" is coming back for another season, Andrew Lincoln confirmed his departure from "The Walking Dead" and a Walter White cameo was teased for "Better Call Saul" — but certainly not as much as years past. It didn't help that this year nearly everything was upstaged by James Gunn, who was fired from writing and directing the third "Guardians of the Galaxy" by the Walt Disney Co. after controversial tweets from a decade ago were resurfaced.  It dominated off-stage conversation from attendees and creators.

Warner Bros. has had some ups and downs with its DC Universe films, but with a clear runway to be the biggest show of the convention with the absence of the Marvel Cinematic Universe, Star Wars or "Game of Thrones," the studio came to Comic-Con ready to fight with "Aquaman," ''Shazam!" and some early footage from "Wonder Woman 1984," which is only three and a half weeks into its shoot. It was easily the best-received presentation of the convention and generated interest for its superhero slate with a notably light-hearted tone, in stark contrast to the DC darkness that has basically become a cliché (and fodder for a "Deadpool 2" meta joke). The studio also for the second year broke out its horror films from New Line into a second event, ScareDiego, held at a more appropriate post-dinner hour to preview films like "It: Chapter Two," which also just started filming, and "The Nun."

For years Entertainment Weekly's starry Saturday night party was the only bash in town, but everyone has been getting into the branded party game this year from Variety to Nerdist luring attendees with promises of star sightings, free drinks, fun sights and photo booths. The WIRED Cafe was a bumping scene every day with a DJ blaring tunes as guests waited in line to see folks like Joe Manganiello and "Riverdale's" Lili Reinhart and Cole Sprouse, National Geographic brought out astronauts on stilts and Neil deGrasse Tyson, while Doug Liman held court at a Variety and YouTube event. The EW soiree on the Hard Rock rooftop was once again packed to the gills with celebrities of every kind, from "Aquaman's" Jason Momoa to "Sharknado's" Tara Reid. The stars of "The Good Place" could be seen dancing to Nicki Minaj, as Ezra Miller tested out the big branded float in the middle of the pool and the new star of "Doctor Who," Jodie Whittaker, bounced around the party with a big smile on her face.

Comic-Con is infamous for its epic lines to get into Hall H, the 6,500-seat room that hosts the highest profile stars and studios, but for many it was not a problem to breeze into the fabled room. Sure, some still slept overnight in line to ensure the best possible seat, but many reported that it was no problem to get in. Instead, the biggest lines were often to get into the Rotten Tomatoes "Your Opinion Sucks!" live-shows and for the various branded installations and experiences like the "Jack Ryan" Escape Room (3-hour wait), the Laika exhibit with a Neil Gaiman-signing (5-hour wait), or a "Ready Player One" installation (which also had its own escape room and hosted nearly 2,000 people a day).

Comic-Con gets a look at gritty Spider-Man spinoff

A Comic-Con without Marvel, HBO gives others a chance