A Comic-Con without Marvel, HBO gives others a chance to pop 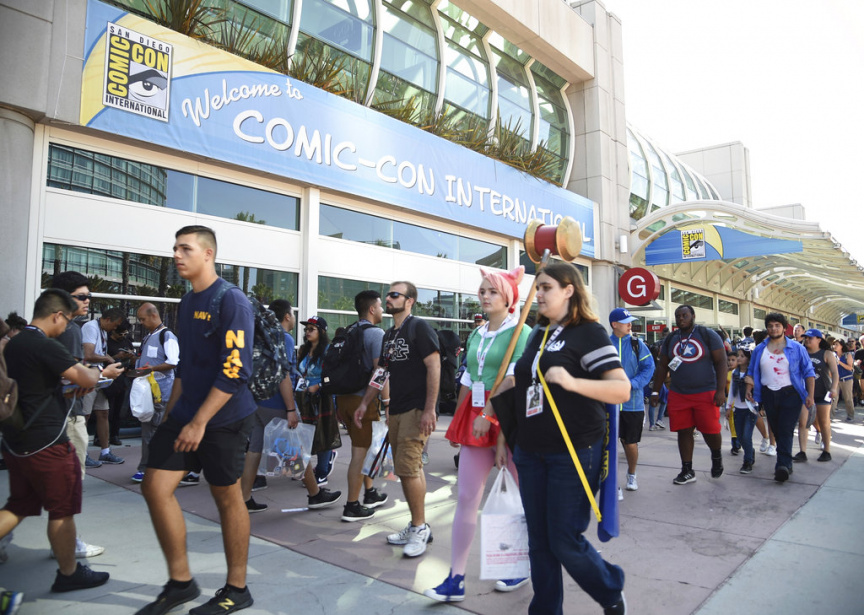 FILE - In this Thursday, July 20, 2017, file photo, guests attend the first day of Comic-Con International in San Diego. More than 130,000 pop culture devotees are descending on San Diego’s Gaslamp District, Wednesday, July 18, 2018, for the annual four-day comic book convention Comic-Con. And without Marvel Studios, HBO and Star Wars at the convention, other brands have a unique opportunity to pop. (Photo by Al Powers/Invision/AP, File)

Over 130,000 pop culture devotees are descending on San Diego's Gaslamp District Wednesday for the annual four-day comic book convention Comic-Con, the big, bright, and very heavily branded cofab of costumed superfans and the corporate sponsors vying for their attention — and dollars.

Interested in dining at a working replica of the "Demolition Man" Taco Bell for the movie's 25th anniversary? Or witness a mock court-martial of Star Wars' Poe Dameron for leading a mutiny in "Star Wars: The Last Jedi"? How about a wine and beer tasting with Neil deGrasse Tyson? Or a "Ready Player One" experience with retro gaming stations and recreation of Room 237 from "The Shining"? If you like pop culture, it's highly likely there is something tailor made for you at Comic-Con 2018.

What started as a 300-person event in 1970 has evolved into a massive operation with events year-round. But San Diego Comic-Con is the marquee occasion. Tickets for four-day access plus preview night can set attendees back $276, before hotel, travel costs, food and any souvenirs. And attendees have come to expect exclusive merchandise on the convention center floor, newsy announcements from some of Hollywood's biggest studios and screenings of anticipated films and television shows.

This year Warner Bros. is coming armed with stars and footage from "Aquaman," ''Shazam!," ''Fantastic Beasts: The Crimes of Grindelwald" and "The LEGO Movie 2," Sony is hyping its Spider-Man spinoff "Venom" and Universal Pictures will be teasing "Halloween" and M. Night Shyamalan's "Glass." On the television side, fans will get a glimpse of new "Doctor Who" star Jodie Whittaker and have a chance to check out "Star Trek: Discovery" and "Riverdale." And streaming services like Netflix and Hulu will also be back with properties like Marvel's "Iron Fist," and the new J.J. Abrams-produced "Castle Rock," which is based on Stephen King stories.

But a few of the major players are conspicuously absent from Hall H, the 6,500-seat room in the San Diego Convention Center that boasts the highest-profile presentations and often attracts an enthusiastic fanbase willing to camp out overnight in line to secure a coveted seat. Those skipping this year include Marvel Studios, HBO ("Game of Thrones") and Star Wars.

"It's a huge deal when major properties like Marvel, Star Wars or HBO don't show up," says Germain Lussier, an entertainment reporter for io9/Gizmodo who has been attending the convention for 15 years. "For the past decade, Marvel Studios panels have consistently been the No. 1 most anticipated thing for movie fans at Comic-Con. Their panels never failed to disappoint with exclusive footage, huge news and big surprises."

Production schedules are more to blame than anything else, however. Lussier notes that each of the absent brands have a big (and intensely secretive) installment coming in 2019, including "Avengers 4," ''Star Wars: Episode IX" and the final season of "Game of Thrones."

"Instead of showing up and disappointing fans, they're simply bowing out to not bolster expectations," he says.

Also, other brands and properties could benefit from unusually open runway.

"Every year, there's always one or two things everyone is talking about. And if it's not 'Avengers 4'or 'Star Wars,' what's it going to be?" says Lussier. "I think this is a huge opportunity for Warner Bros. to steal every headline with major news and exciting footage."

5 of the biggest takeaways from Comic-Con 2018

Comic-Con gets a look at gritty Spider-Man spinoff