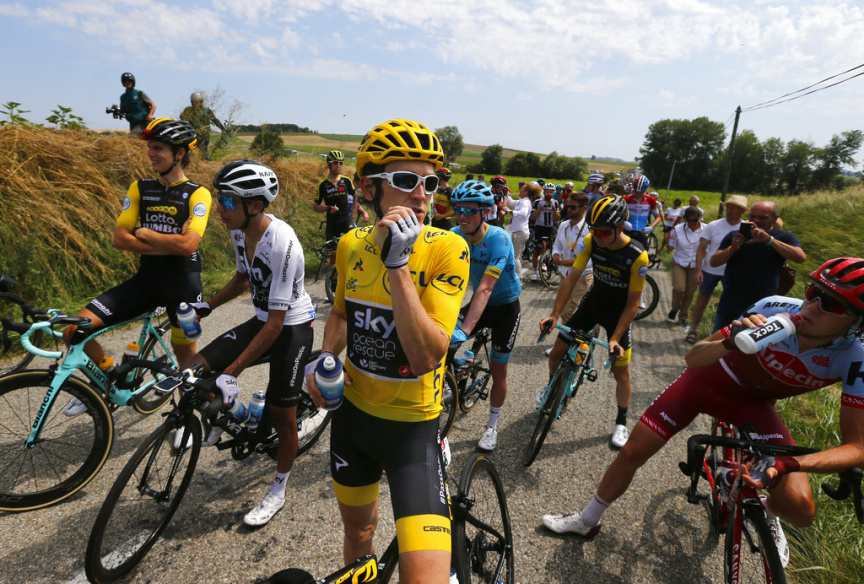 BAGNERES DE-LUCHON, France (AP) — Four-time champion Chris Froome was among riders whose eyes needed treatment for tear gas when a farmers' protest interrupted the 16th stage of the Tour de France on Tuesday.

Bales of hay blocked the road 30 kilometers into the 218-kilometer leg from Carcassonne to Bagneres De-Luchon. Tour organizers said police used tear gas to disperse the protesters as the peloton approached.

Froome, race leader Geraint Thomas, and world champion Peter Sagan were among those affected by the chemical. Froome was treated with eye drops and Sagan poured water over his face to clean his eyes.

The stage resumed after a 15-minute delay.

According to French media, the small group of farmers from the local Ariege department protested against the reduction of European Union funding.

This Tour has been marred by incidents.

Race organizers have struggled to deal with angry fans protesting Froome's participation. After fans threw flares at riders in the climb to the ski resort of Alpe d'Huez, Tour organizers banned the use of smoke flares for the rest of the race.

Froome raced all season under the cloud of a potential ban for using twice the permitted level of salbutamol during his victory at the Spanish Vuelta in September. He was cleared only just before the Tour. He said he has been repeatedly spat at since the race started, and spectators have punched him and tried to make him fall off his bike.