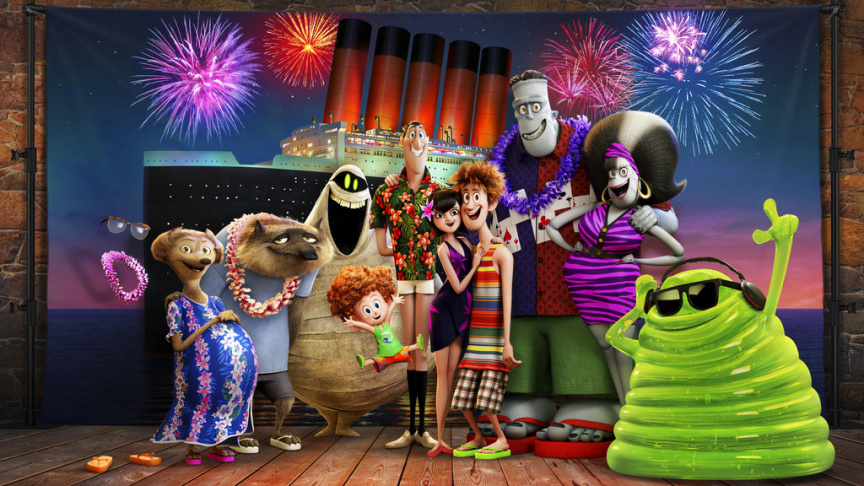 LOS ANGELES (AP) — "Hotel Transylvania 3: Summer Vacation" has checked into the No. 1 spot at the box office in its opening weekend and left the Dwayne Johnson action thriller, "Skyscraper," in the dust.

Sony Pictures estimated Sunday that the animated family movie earned $44.1 million from North American theaters. As the first in the franchise to open in the summer, it's just slightly under the previous installment's $48.5 million debut in September 2015.

"It's really terrific," said Adrian Smith, Sony's head of domestic distribution. "We're positioned to take advantage of the valuable summer weekdays and there are six weeks of summer left."

The successful series has grossed over $900 million worldwide to date.

Going into the weekend, experts expected a three-way race to the top between "Hotel Transylvania 3," ''Skyscraper" and "Ant-Man and the Wasp," but the family film won by a large margin.

"There haven't been a lot of options for families this summer," said comScore senior media analyst Paul Dergarabedian. "They become instant hits."

Johnson has been a consistent presence in movie theaters this year with both "Jumanji: Welcome to the Jungle" and "Rampage" prior to "Skyscraper." Both previous films opened in the $35 million range, and while "Jumanji" went on to be a worldwide box office juggernaut, "Rampage" petered out domestically just under $100 million. As with "Rampage," however, the studio is expecting the majority of "Skyscraper" profits to come from international audiences.

"'Skyscraper' is really engineered for a global release and it got a terrific start," said Jim Orr, Universal's president of domestic distribution. "We have great faith in a more than terrific run at the domestic box office going forward."

Internationally, "Skyscraper" grossed $40.4 million from 57 territories for a global total of $65.9 million.

Second place went to Disney and Marvel's "Ant-Man and the Wasp," which brought in an additional $28.8 million in its second weekend, down 62 percent from last week. It's one of the steeper second week falls in the Marvel Cinematic Universe. The first "Ant-Man" fell 53 percent.

A handful of smaller releases made notable splashes this weekend including Annapurna's buzzy dystopian satire "Sorry to Bother You," which opened in limited release last week and added 789 locations this weekend. It earned $4.3 million in its expansion for spot No. 7 on the charts.

The coming of age film "Eighth Grade" also scored top marks, and the highest per theater average of the year, with $252,284 from four theaters. The well-reviewed pic will expand nationwide in the coming weeks.

And documentaries continue to perform well too, including the Fred Rogers doc "Won't You Be My Neighbor?" which added $1.9 million from 868 theaters, and "Three Identical Strangers" which expanded to 167 theaters and grossed $1.2 million.

Estimated ticket sales for Friday through Sunday at international theaters (excluding the U.S. and Canada), according to comScore: