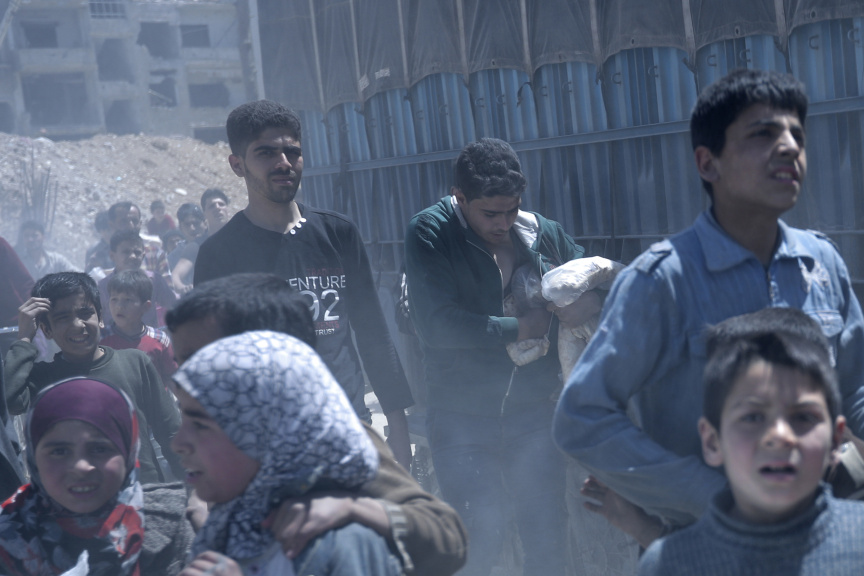 In this Monday, April 16, 2018 file photo, a Syrian youth places breads inside his jacket as authorities distributed bread, vegetables and pasta to Douma residents, in the town of Douma, the site of a suspected chemical weapons attack, near Damascus, Syria. (AP Photo/Hassan Ammar, File)

THE HAGUE, Netherlands (AP) — The global chemical weapons watchdog said Friday in an interim report that "various chlorinated organic chemicals" were found at the site in Syria where a chemical attack is suspected of being carried out in April.

A fact-finding mission of the Organization for the Prohibition of Chemical Weapons warned that it was too early to come to conclusions about the suspected attack on the town of Douma, saying that "work by the team to establish the significance of these results is ongoing."

At the same time, the investigators reported based on initial test results that "no organophosphorous nerve agents or their degradation products" were detected in samples taken from people allegedly exposed or in the environment.

The chemical weapons organization, based in the Netherlands, historically did not have authority to assign blame for chemical attacks, but national representatives recently empowered it to identify the parties it found responsible.

The team said in its initial report on Douma that two industrial gas cylinders were discovered at different locations in the town: one on a top-floor patio and the other on a bed in a top-floor apartment. It said it is working to establish how they got there and whether they are linked to the alleged attack.

The team said it "needs to continue its work to draw final conclusions regarding the alleged incident and, to this end, the investigation is ongoing."

Louis Charbonneau, the U.N. director for Human Rights Watch, said the OPCW should "move quickly to finish its investigation and determine whether a chemical weapon attack occurred."

"In the meantime, it should apply its new authority to determine responsibility for the use of chemical weapons in Syria to two other chemical weapons attacks (fact-finders) recently confirmed," Charbonneau said in a statement.

Russia and Syria have sought to disprove that Douma was hit by a poison gas attack. In April, they brought a group of Syrians to the global chemical weapons watchdog's headquarters in The Hague to denounce the reports of an illegal attack as fake.

The insistence by Russia and Syria that a chemical weapons attack was staged runs counter to accounts from witnesses and survivors interviewed by The Associated Press, some of them in Douma, who described being overwhelmed by a strong smell of chlorine.

The survivors interviewed by the AP in Douma after government forces took control of the town blamed rebels from the Army of Islam group of being behind the attack.

Other survivors who left Douma said the chlorine attack occurred amid government airstrikes and blamed the government of Syrian President Bashar Assad.