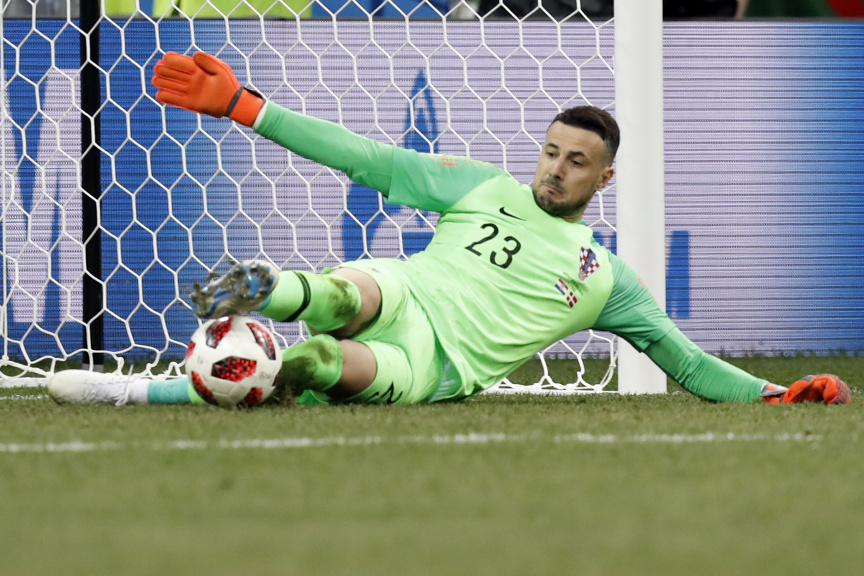 Croatia goalkeeper Danijel Subasic saves the decisive penalty during a penalty shoot out after extra time during the round of 16 match between Croatia and Denmark at the 2018 soccer World Cup in the Nizhny Novgorod Stadium, in Nizhny Novgorod , Russia, Sunday, July 1, 2018. (AP Photo/Efrem Lukatsky)

In the second straight shootout of the tournament, the Croats advanced to the quarterfinals on Sunday with a 3-2 victory over Denmark on penalties following a 1-1 draw.

Subasic tipped the first penalty of the shootout from Denmark midfielder Christian Eriksen onto the post. He then dived to his right to save an attempt from substitute Lasse Schone. Finally, he used his feet to block Nicolai Jorgensen's attempt.

"He was a hero tonight," Croatia coach Zlatko Dalic said. "He saved three penalties in a shootout. You don't see that every day."

Subasic became only the second goalkeeper to save three penalties in a shootout at the World Cup, matching the feat of Portugal keeper Ricardo against England in 2006.

Croatia will next face host Russia in the quarterfinals on Saturday in Sochi. Russia also advanced on penalties, beating Spain 4-3 following another 1-1 draw.

Croatia had a chance to take the lead late in the game at Nizhny Novgorod Stadium, but Luka Modric's penalty was saved by Kasper Schmeichel. The Denmark goalkeeper, who also saved a pair of penalties in the shootout, dived to his left to smother Modric's attempt in the 116th minute.

Subasic's three saves and Schmeichel's two made it the most combined saves in a World Cup shootout.

Modric, however, made his penalty in the shootout and Ivan Rakitic scored the decider with a shot to the left side of the net as Schmeichel dived the wrong way.

After surviving the shootout, Subasic had to survive the celebration. Domagoj Vida lifted the keeper onto his shoulders as they celebrated the win, and then dropped him.

Croatia entered the match after impressing in the group stage, including a 3-0 dismantling of two-time champion Argentina at the same stadium. But Denmark, unbeaten in 18 games coming into the game, provided tough opposition.

The Danes took the lead in the first minute when defender Mathias Jorgensen scrambled in a shot that went in off Subasic's left hand and then the left post. It was Denmark's fastest ever World Cup goal.

Croatia equalized in the fourth minute with another untidy goal. Henrik Dalsgaard's clearance hit a teammate and fell for Croatia forward Mario Mandzukic to hook the ball in.

The teams stayed even for the next 116 minutes, including the 30 minutes of extra time.

But it was Schmeichel, the son of former Denmark goalkeeper Peter Schmeichel, that sent it to extra time with his penalty save on Modric's attempt.

The Croats earned the penalty when Ante Rebic was set free on a counterattack and skipped past Schmeichel, only to be fouled from behind by Mathias Jorgensen — the scorer of Denmark's goal.

Modric's spot kick was weak, though, and Schmeichel dived to his left to smother it for the first of his three penalty saves.

In the shootout, Schmeichel saved attempts from Milan Badelj and Josip Pivaric.

"I am so sorry for Kasper and the whole team," Denmark coach Age Hareide said. "That's just the brutality of football."

Peter Schmeichel jumped out of his chair and roared with delight when his son saved Modric's penalty in extra time. The former Manchester United keeper did the same when Kasper Schmeichel stopped two penalties in the shootout.

Suker was the happy one at the end, though, watching as his country made the World Cup quarterfinals for only the second time. Suker was the star for Croatia when it made the semifinals in France in 1998 in its first World Cup appearance.

Croatia will next face the host nation, a team written off at the start of the World Cup.

"We must not relax. We must not be arrogant," Dalic said. "Russia would not have progressed if it was not a good team.

"The whole world will watch. We've come so far, but we do not intend to stop here. I am sure Russia has the same mentality. It is going to be a big game."

Iniesta retires from Spain after WC loss to Russia