Iniesta retires from Spain after World Cup loss to Russia 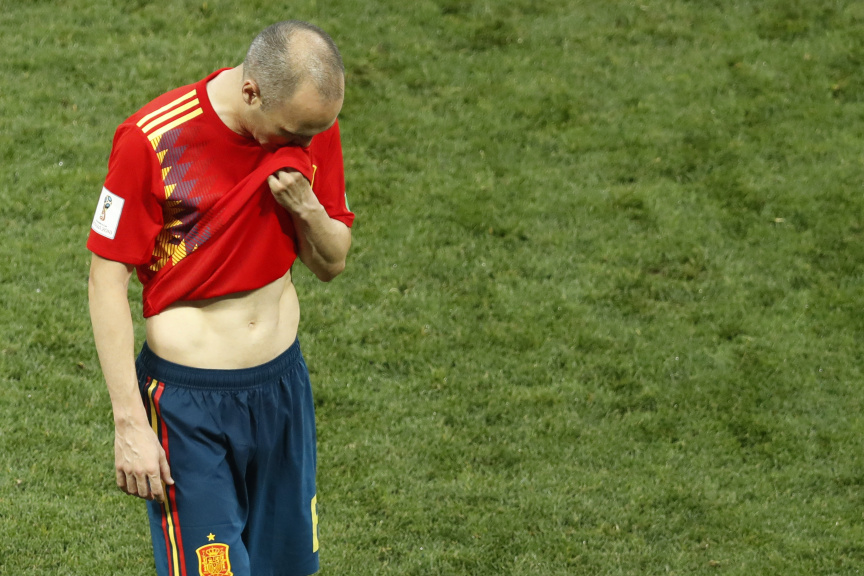 Spain's Andres Iniesta leaves the pitch after the round of 16 match between Spain and Russia at the 2018 soccer World Cup at the Luzhniki Stadium in Moscow, Russia, Sunday, July 1, 2018. Russia eliminates Spain 4-2 on penalties after game ends 1-1. (AP Photo/David Vincent)

MOSCOW (AP) — Andres Iniesta, the elegant midfielder who was a symbol of Spain's golden generation, retired from international soccer following the team's loss to Russia in a penalty shootout at the World Cup on Sunday.

With his precise passes and clever playmaking, Iniesta was a key piece of the Spanish team that dominated soccer not so long ago. But his skills couldn't keep Spain from avoiding another disappointing elimination — the team's third in a row at a major tournament.

Iniesta, who scored the winning goal in the 2010 World Cup final, had already hinted this would be his final tournament with the national team, and he confirmed his retirement after the last-16 match in Moscow.

"The reality is that this was my last match with the national team," the 34-year-old Iniesta said. "On a personal level, it's the end of a wonderful phase. Sometimes the endings are not how you dreamed them."

Iniesta was surprisingly benched to start the game against Russia, but came on in the second half with the score level at 1-1. His presence helped Spain improve, giving it more depth in midfield, but it wasn't enough for the team to break the deadlock. The score remained 1-1 after extra time and Russia went on to win 4-3 on penalties to secure a spot in the quarterfinals.

"It's the coach who makes the decisions," Iniesta said. "He thought it was the best thing to do. In the end it was cruel to lose in penalties like that."

Iniesta, who struggled physically in recent years, converted Spain's first penalty in the shootout with what was his last ever shot at a World Cup. Jorge "Koke" Resurreccion and Iago Aspas eventually missed their shots and Russia prevailed.

"Overall, this is definitely the saddest day of my career," said Iniesta, who made 131 matches for Spain.

In addition to scoring the World Cup's winning goal in 2010, Iniesta had also been key for Spain when it won the 2008 and 2012 European Championships with its tiki-taka style modeled on Barcelona's ball-possession game.

Earlier this year, Iniesta had already announced his retirement from Barcelona after 16 highly successful seasons with the Spanish club. He later signed with Japanese club Vissel Kobe.

Defender Gerard Pique may also have played his final match with Spain. He had said before the tournament started that he would be retiring after the tournament in Russia.