Officers being sent to the atolls in preparation for the election 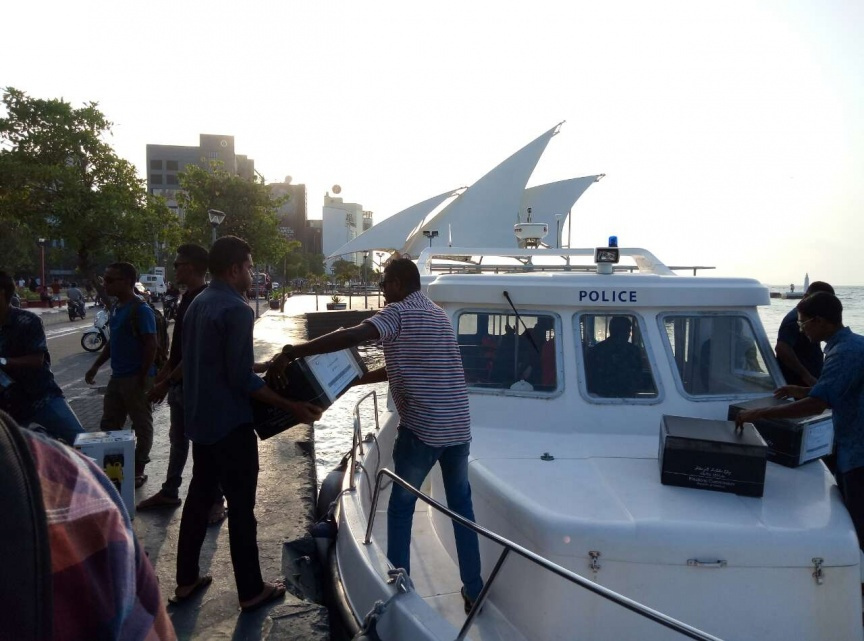 Ballots being taken on a police launch to be taken to the atolls. (Photo/Elections Commission)

Maldives Police Service has said that they would begin sending officers to the atolls next month in preparation for the upcoming Presidential Election.

Talking to the press regarding the police preparations for the election, Police Spokesperson, Chief Superintendent, Ahmed Shifan, said that police are working hard to ensure the upcoming election will go smoothly and peacefully. And so preparations are being made since January under the supervision of the Assistant Commissioner, Hamdhoon Rasheed.

Superintendent Shifan said that all the resources of the police to ensure a safe election and the police would not allow any long planned attacks of any kind during the election. And the police is prepared for anything like that.

He said that special training and workshops will be held for the police officers and the officers assigned to the atolls will begin going to the atolls in late June. Shifan said that pre-election information are bein sought as well.

In regards to allowing the campaign work, Superintendent Shifan said that police would allow all political activities that take place within the law. And appropriate measures will be taken as per the law against those who step out of the bounds of the law. He said that the activities in the campaign halls will also be allowed to take place.

Nasheed decides not run in the Presidential Election