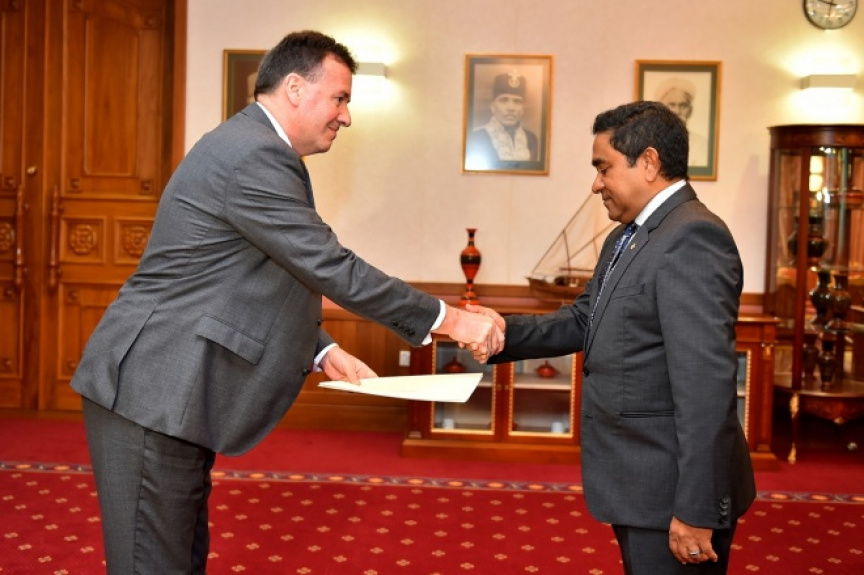 Inside the visit to President Abdulla Yameen Abdul Gayoom by the Australian Ambassador to the Maldives and Sri Lanka. (Photo/President's Office)

The Maldivian government has responded to the statement by the Australian government that stated that an election that does not involve the opposition will not be accepted.

Australia issued a statement after the Australian Ambassasador's visit to the Maldives.

In response, the Maldivian Foreign Ministry issued a statement tonight, the government reiterate the unwavering commitment to work with the Elections Commission of the Maldives and all other relevant authorities of the State to ensure a free, fair and inclusive election in which all eligible candidates are granted an equal opportunity to contest.

The statement tonight said that it is vital that all political actors conduct their activities responsibly in accordance with the Constitution and all relevant rules and regulations of the country. In this regard, the Government notes its deep concern on the actions by some political actors which are in clear violation of the Constitution and the laws of the country and highlights that such actions undermine the democratic values and the rule of law.

The Government assured its full commitment to protect and promote fundamental freedoms and ensure that the rule of law is implemented to the letter and spirit of the Constitution without any exceptions.

"Since the introduction of the multi-party system in 2008, all elections held, including the parliamentary elections in 2014 and local government elections in 2014 and 2017 as well as several bi-elections, held during the term of the incumbent government, were declared by the international and local observers as free, fair and credible. Therefore, the Government is confident that there is no room for the presidential elections scheduled for September this year to be an exception." The statement said.

The Maldivian government also expressed its gratitude to the Government of Australia for the support extended for the socio-economic development of the country, in particular in the area of human resources development, over the years.