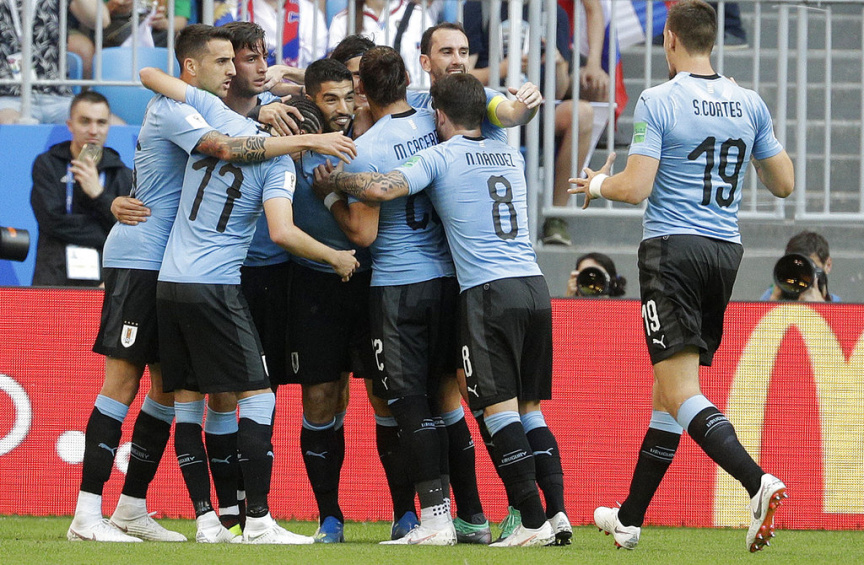 Uruguay's Luis Suarez, centre, celebrates after scoring the opening goal during the group A match between Uruguay and Russia at the 2018 soccer World Cup at the Samara Arena in Samara, Russia, Monday, June 25, 2018. (AP Photo/Gregorio Borgia)

Sitting at the podium in the post-match news conference following Uruguay's 3-0 victory over Russia, a reporter asked him why he often wore a sad expression.

Suarez tossed aside his translation headphones, then smiled broadly in defiance and finally said: "What a waste of time. Next question please."

Other than that little blip, Suarez has been on his best behavior in Russia, scoring twice as Uruguay swept through the group stage with three straight victories — sending the two-time champions to the knockout round for the third straight World Cup.

Edinson Cavani also scored Monday against the host nation, which dropped its first match of the tournament.

Both teams were already assured of spots in the knockout round, but Uruguay's victory put it at the top of Group A and looking toward a match in Sochi on Saturday against the second-place finisher from Group B.

Uruguay, which also benefited from an own-goal in the first half, had its third straight shutout of the tournament after consecutive 1-0 victories over Egypt and Saudi Arabia. The Uruguayans and goalkeeper Fernando Muslera have not allowed a goal in any of the team's six matches this year.

"After winning the first two matches 1-0, our goal was to get another," Suarez said. "We wanted to play the same we had before, only better."

By advancing to the round of 16 with victories over Saudi Arabia and Egypt, Russia secured its best World Cup showing in the post-Soviet era. But Uruguay — ranked No. 14 in the world — posed a far greater challenge to the hosts.

Suarez, who seems to have put past World Cup controversies behind him, scored with a low shot from just outside the box that sailed past the wall of Russian players and into the right corner of the goal. The Barcelona striker then blew a kiss to the national team's fans.

Suarez is the all-time leading scorer for Uruguay with 53 international goals in 101 appearances, including a goal against Saudi Arabia last Wednesday.

But his two past World Cups have been marked by controversy: He was sent home from Brazil four years ago for biting Italy defender Giorgio Chiellini. In 2010, he used his hands to block Dominic Adiyiah's header and then celebrated when Ghana missed the penalty kick. Uruguay prevailed in a shootout, and Suarez was marked as a dirty player.

Uruguay took a 2-0 lead over Russia on an own-goal — the sixth of the World Cup to tie the tournament record. Midfielder Diego Laxalt's shot from long range deflected off Denis Cheryshev's foot and past goalkeeper Igor Akinfeev.

Russia, the lowest ranked team in the field at No. 70, went down to 10 men after right back Igor Smolnikov received a second yellow card in the 36th minute. Russia coach Stanislav Cherchesov immediately took off Cheryshev for defender Mario Fernandes.

Cavani scored in the 90th minute and was taken out a short time later. The Paris Saint-Germain forward put a rebound into the left corner of the net after Diego Godin's header was parried by Akinfeev.

"It's important for strikers to score," Uruguay coach Oscar Tabarez said. "When they feel comfortable or at home, they score goals. Strikers contribute a lot to a team. We know as we improve our game we will offer opportunities to all of our players to improve their game."

Uruguay was making its 12th appearance at the World Cup, which it won in 1930 and 1950. More recently, the team finished fourth in South Africa in 2010 and made the round of 16 in Brazil four years ago.

"It's clear that they have top notch players, while we have very good players, too," Cherchesov said. "I like how my team played after we lost one player. We were rather aggressive."

Both teams will face the top finishers from Group B, which includes Portugal, Spain, Iran and Morocco. By finishing second, Russia will play at the Luzhniki Stadium in Moscow against the Group A winner.

Because Russia had the advantage on goal difference from its first two group matches, it would have won the group with a draw.

Russia left back Yuri Zhirkov was taken out of the match against Egypt because of an ankle injury but was available as a substitute on Monday. Teammate Alan Dzagoev was out again because of a hamstring injury sustained in the opener against Saudi Arabia but he may return for the knockout round.

Defender Jose Maria Gimenez didn't play for Uruguay because of a right thigh injury. Gimenez scored in the team's opening match of the tournament, a 1-0 victory over Egypt. The team did not say when he might return.

Russia's home-country advantage could only carry it so far against its more experienced opponents. But the Russians had recent history to think they were up to the challenge: The teams played to a 1-1 draw in a 2012 friendly in Moscow.

Suarez scored in that match, and thwarted Russia in this one, too.