President: 5 lagoons in K. Atoll will be put up for tourism in 2018 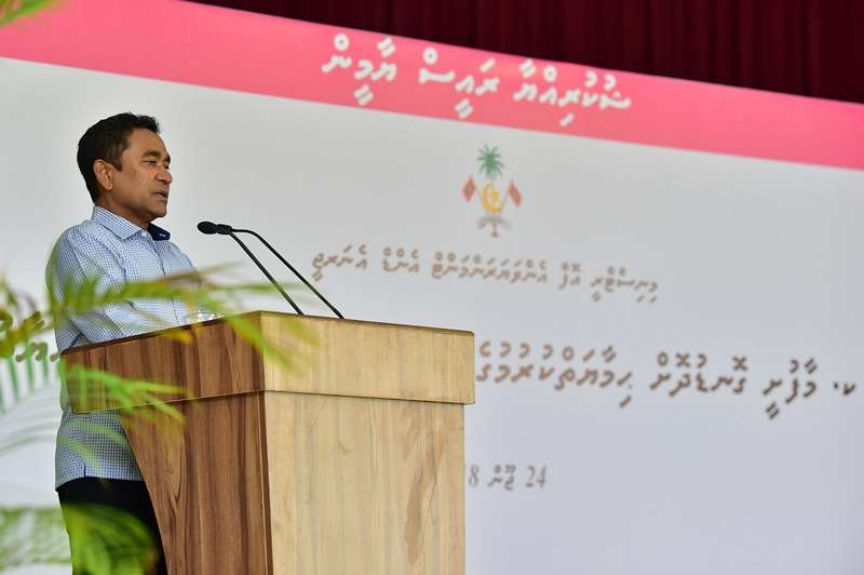 Five lagoons in K. Atoll will be put up for bid to develop for tourism before the end of the current year, says Maldivian President Abdulla Yameen Abdul Gayoom.

Yamen is on a tour of three islands in K. Atoll. Addressing the crowd in K. Maafushi, which was his second stop in the tour, Yameen said that if he is elected for a second term in office, he will open five lagoons in K. Atoll for tourism before the end of this year.

“What we have decided is, if we are, In Sha Allah, re-elected to a second term, we will open five lagoons in K. Atoll for bid, to develop for tourism,” said Yameen.

He said that tourism can be developed limitlessly by setting aside ancient attitudes.

Yameen said the lack of land space in Maldives had once been considered a challenge. But that the reality people need to accept is that there is no shortage of land in Maldives, and that land can be reclaimed.

“There’s MTTC’s CEO, Ziyath. Ziyath will say land can be increased. So that’s not something we consider anymore. Such thinking is a bit outdated,” said Yameen, hinting at the convenience in undertaking land reclamation project with the use of MTCC’s dredger, ‘Mahaa Jarraafu’.

Yameen said the people of Maldives need to move forward with an effective target, and that he belives nothing is impossible.

“So the crew members who work with me need to remember that there’s nothing we can’t overcome as long as I’m the captain,” said Yameen.

The announcement that five new lagoons will be developed in K. Atoll for tourism comes as the government has undertaken a major integrated resort project in K. Enboodhoo. Enboodhoo is a 15-minute speedboat ride away from Velana international Airport and eight kilometers away from Male’ City and Hulhumale’.

'India set quota for staple goods same as before'