President: No one has the right to attempt a coup before the people have their say 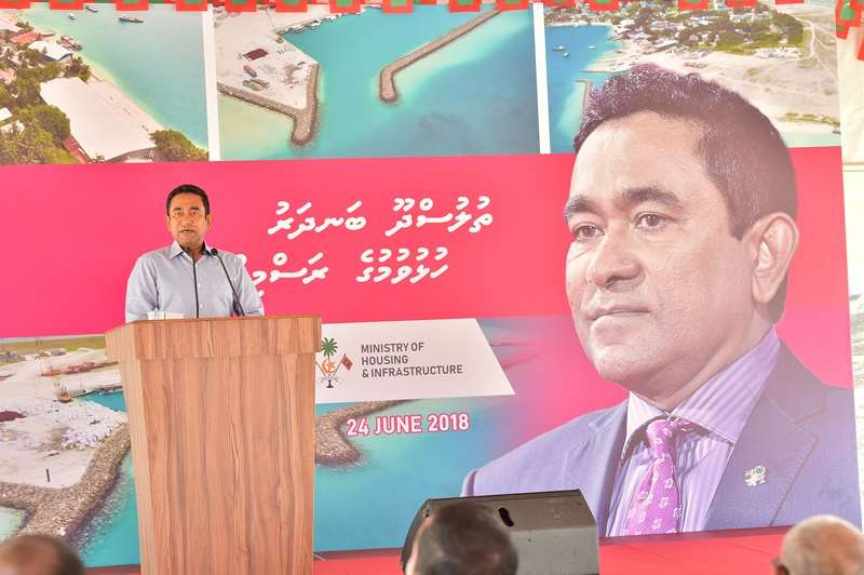 No one has the right to threaten the entire country by attempting a coup d’etat before the people have their say at a general election, says President Abdulla Yameen Abdul Gayoom.

Yamen is on a tour of three islands in K. Atoll. Addressing the crowd in K. Thulusdhoo, which was his first stop in the tour, Yameen said though the jihad of Maldivian legends the likes of Bodu Thakurufaanu and King Izzuddin were part of ancient Maldivian history, the people needed to understand that such a plight may befall Maldives any given day.

“The wars of the past and the tactics and methods used in modern wars may be different. But every page in history shows proof there are people, from our own quarters, spying against us,” said Yameen.

He said the people behind the coup attempt on February 1, 2018 made their plans in a similar manner. He said that many a reason though they may show for attempting the coup. It simply wasn’t their right to attempt the coup.

“There’s no right, no reason nor necessity to commit such an act over the people. No one is permitted to do so,” said Yameen.

He said the few influential figures who were behind the coup attempt did not have the right to take such action before the people have their say. He said the people need to be aware of the existence of a few Maldivians who attempted to make Maldives suffer and trampled on the rights of the people.

The Supreme Court issued an order on February 1, 2018 which called for the immediate release of nine politicians and the immediate reinstatement of 12 lawmakers. Yameen’s administration refused to follow the court order and declared a State of Emergency in the country.