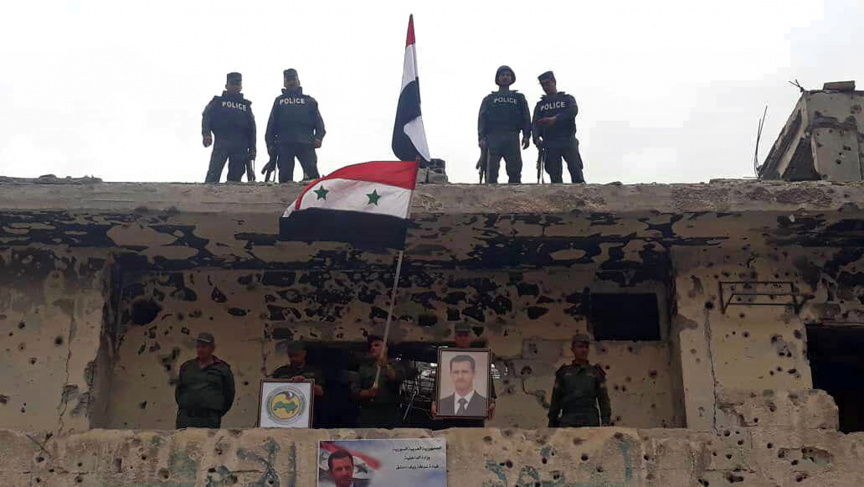 In this photo released by the Syrian official news agency SANA, Syrian military and police forces fly their national flags on a damaged building and hold a picture of Syrian President Bashar Assad, in the Hajar al-Aswad neighborhood, southern Damascus, Syria, Tuesday, May 22, 2018. (SANA via AP)

Russian and Syrian government troops and pro-government gunmen have been fighting members of the Islamic State group in the eastern province of Deir el-Zour where the extremists resumed their attacks against government forces and their allies in recent weeks.

The Russian ministry said that the dead were military advisers attached to a Syrian army unit in the Deir el-Zour.

In a statement reported by Russian news agencies, the ministry said "two Russian military advisers, who controlled fire of the Syrian battery, died at the scene." It says five others were wounded, two of whom died in a Russian military hospital.

The ministry said 43 insurgents were killed in the nighttime battle.

The Russian statement came two days after the Islamic State group said its fighters launched a surprise attack on Wednesday from two axes on a joint Syrian and Russian forces convoy west of the town of Mayadeen, killing 15 Syrian and Russian soldiers. IS militants destroyed five army trucks and armored vehicles and damaged a rocket-launcher, IS claimed in a statement.

In the same area, IS fighters stormed three Syrian army checkpoints killing eight soldiers and captured five others, the group said in a statement.

It was not immediately clear if IS was speaking about the same area where the Russian advisers were killed.

The Britain-based Syrian Observatory for Human Rights, a war monitor, said IS fighters launched two new attacks in Deir el-Zour on Saturday near the town of Mayadeen and the town of Boukamal near the Iraqi border.

The Observatory said five days of fighting in Deir el-Zour killed 76 troops and pro-government gunmen as well as 25 IS fighters.

Russia has provided crucial military support to President Bashar Assad's forces, helping them to roll back mainstream rebels as well as the Islamic State group. Russia and Syria both refer to the armed opposition as "terrorists."