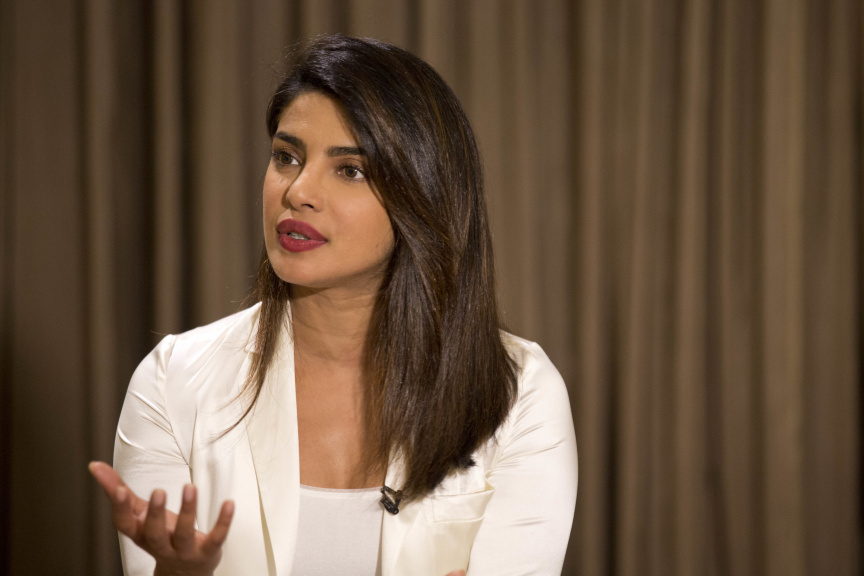 DHAKA, Bangladesh (AP) — Priyanka Chopra, actress and a goodwill ambassador of the United Nations' children's agency, said Thursday the world should be more compassionate to hundreds of thousands of Rohingya children who desperately need help in Bangladeshi camps where they've been sheltered.

Some 700,000 Rohingya Muslims have fled Myanmar's Rakhine state since late August to escape military-led violence and are now seeking U.N. protection to return home. Almost 60 percent of the total refugees are children, and 60 babies are being born every day in camps in Bangladesh.

Many children crossed the border into Bangladesh without a parent, according to UNICEF. They saw violence, dead bodies, burned homes while many saw their parents and family members killed in front of their eyes and their mothers and sisters raped. Children were also shot in their hands and legs. Many are recovering from psychological trauma.

Chopra, who came to Bangladesh directly from London after attending the royal wedding of her American friend Meghan Markle on a four-day visit, visited camps in Cox's Bazar bordering Myanmar and passed time with the desperate children at safe homes, makeshift schools and helped them draw pictures of sunshine and hope.

On Thursday, during a press conference and a subsequent interview with The Associated Press, she refused to answer any questions beyond children's welfare in the camps and beyond. She recognized the Rohingya refugee crisis is a "political crisis" but would not talk beyond her mandate as a goodwill ambassador of UNICEF.

"I'm here on behalf of children. I'm too small, I feel, to speak about political situation like this. I'm not someone who believes in a blame game. I think that creates more hatreds and animosities," the former Miss World said.

Chopra, whose third Hollywood film is expected to be released on the Valentine's Day in next February, said she was overwhelmed to see the condition of the children in the camps she visited.

"Open your heart to the children," Chopra, a star in India's Hindi films, urged the world community in the interview with the AP. "Be compassionate for the sake of the humanity," she said.

During her visit to the camps Chopra saw children being screened for malnutrition, a statement by UNICEF said. With 163,295 children less than 5 years old living in the camps, UNICEF's nutrition centers offer a vital lifeline by screening and treating children for malnourishment and teaching new mothers breastfeeding practices to help make sure their babies have the best possible start in life during the critical first 1,000-day period, it said.

She said the international community was working to support the children, but that is not enough.

"Please don't divide children, they are future citizens of the world we live in," she said. "No matter where a child is from or what his or her circumstances are, every child is the future of this world," she said.

The actress, who made debut in Hollywood by acting in Baywatch in 2017, said the sufferings of the children shook her because of the violence "these children were exposed to."

"The kids I met were smiling but I could still see sadness in their eyes that reflected the carnage and horror they witnessed," she said.

She said the children need more support and urged the international community to come forward.

"There is still so much more support needed," she said, also a star in the American TV thriller series "Quantico," said. "It is up to us, as global citizens, to make sure they have a future."

"It was wonderful to meet her. She has done a commendable job," Hasina said.

The recent violence in Myanmar began when Rohingya insurgents staged a series of attacks on Aug. 25 on about 30 security outposts and other targets.

In a subsequent crackdown described by U.N. and U.S. officials as "ethnic cleansing," Myanmar security forces have been accused of rape, killing, torture and the burning of Rohingya homes.

Thousands are believed to have been killed.

Myanmar authorities consider Rohingya to be Bengali immigrants from Bangladesh, and are even refraining from using the word "Rohingya," even though the refugees in Bangladeshi camps say they belong to Myanmar where they have been living for centuries.

Bangladesh and Myanmar signed an agreement in November to start repatriating the Rohingya from January, but it is being delayed for lack of safety inside Myanmar and a complicated verification process. Global human rights groups and the U.N. said the condition in Myanmar was not safe for their return.

This year the U.N. refugee agency and Bangladesh finalized a memorandum of understanding that said the repatriation process must be "safe, voluntary and dignified . in line with international standards."

'Solo' sputters in takeoff with $83.3M at box office