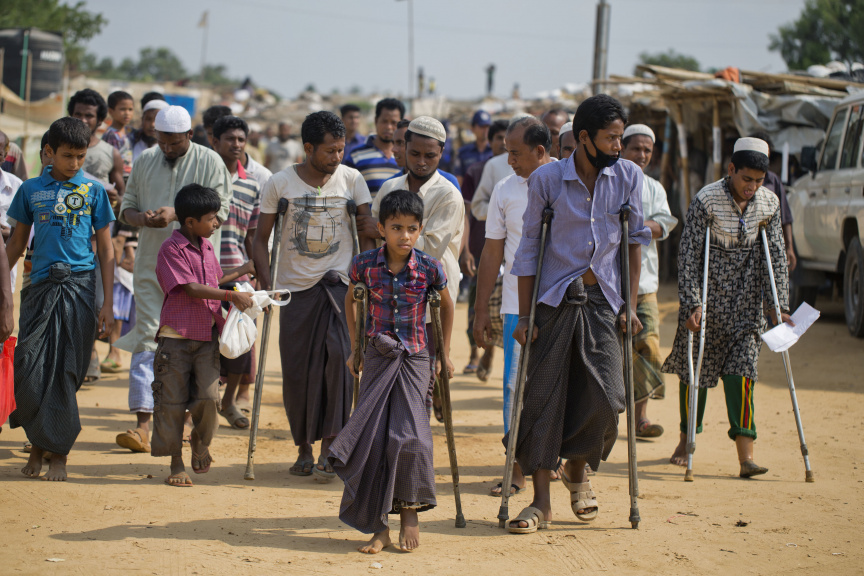 Wounded Rohingya refugees walk with the help of crutches as they await the arrival of a U.N. Security Council team at the Kutupalong Rohingya refugee camp in Kutupalong, Bangladesh, Sunday, April 29, 2018. (AP Photo/A.M. Ahad)

KUTUPALONG, Bangladesh (AP) — A U.N. Security Council team visiting Bangladesh promised Sunday to work hard to resolve a crisis involving hundreds of thousands of Rohingya Muslims who have fled to the country to escape military-led violence in neighboring Myanmar.

The diplomats, who visited the sprawling camps and border points where about 700,000 Rohingya have taken shelter, said their visit was an opportunity to see the situation firsthand.

Russia's deputy ambassador to the United Nations, Dmitry Polyansky, said he and his fellow team members would not look away from the crisis after their visit, though he warned that there are no simple solutions.

"It's very necessary to come and see everything at place here in Bangladesh and Myanmar. But there is no magic solution, there is no magic stick to solve all these issues," he said at a news conference at the Kutupalong refugee camp in the coastal town of Cox's Bazar.

The diplomats will conclude their three-day visit to Bangladesh on Monday, when they leave for Myanmar.

The recent spasm of violence in Myanmar began when Rohingya insurgents staged a series of attacks on Aug. 25 on about 30 security outposts and other targets. In a subsequent crackdown described by U.N. and U.S. officials as "ethnic cleansing," Myanmar security forces have been accused of rape, killing, torture and the burning of Rohingya homes. Thousands are believed to have been killed.

The diplomats, comprising representatives from the five permanent Security Council members — China, France, Russia, the United Kingdom and the United States — and 10 non-permanent member states, talked to some 120 refugees, including rape victims.

Peru's ambassador to the U.N., Gustavo Adolfo Meza Cuadra Velasqez, said he and his fellow team members were ready to "work hard" and were "very concerned" about the crisis.

"I think we have witnessed the magnitude of the refugee crisis and very tragic situation of some of the families," he said.

The refugees are seeking U.N. protection to return home. The U.N. refugee agency and Bangladesh recently finalized a memorandum of understanding that said the repatriation process must be "safe, voluntary and dignified ... in line with international standards."

Karen Pierce, the U.K.'s ambassador to the United Nations, said the Security Council would continue to work on enabling the refugees to return to Myanmar, but that the Rohingya must be allowed to return under safe conditions.

"The problem there lies in their expulsion, treatment and the fact that they had to flee to Bangladesh," she said.

Rohingya are denied citizenship in overwhelmingly Buddhist Myanmar, where they've faced persecution for decades. They're derided as "Bengalis," and many in Myanmar believe they are illegal migrants from Bangladesh. Most of them live in poverty in Myanmar's Rakhine state, next to Bangladesh.

Thousands of refugees gathered amid scorching heat at the Kutupalong camp to welcome the visiting delegation. They carried placards, some of which read "We want justice."

"We are not Bengali, we are Rohingya. They have killed my family members, they tortured us, they will kill us again," said one of the refugees, 29-year-old Mohammed Tayab, standing in front of a tent where he was waiting to meet the U.N. team.

Tayab, who was using crutches, said he was shot by Myanmar troops in his right leg.

He said he lost a brother, an uncle and a nephew after Myanmar soldiers shot them dead.

"I am here to talk to them, we want justice from them," he said of the diplomats. "I will tell them my stories. They should listen to us."