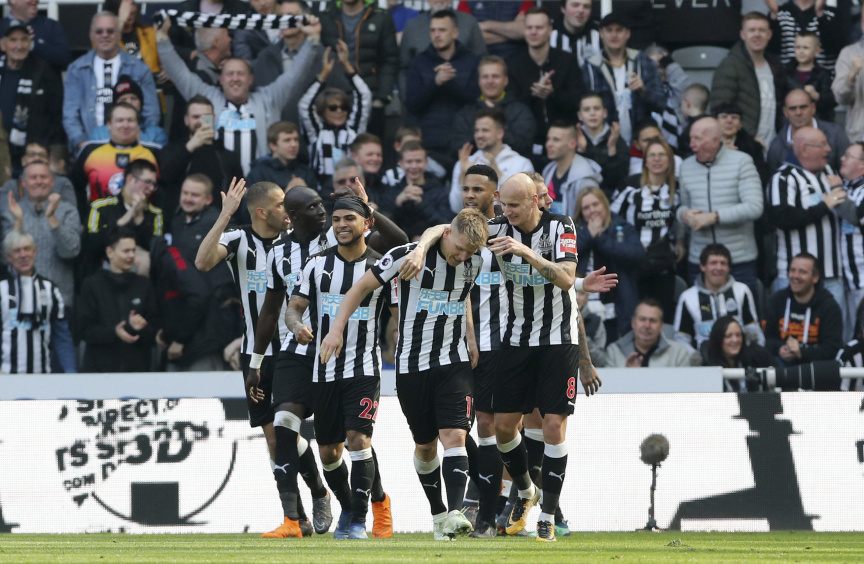 NEWCASTLE, England (AP) — Newcastle virtually assured its Premier League status for another season by coming from behind to beat a depleted Arsenal side 2-1 thanks to Matt Ritchie's second-half winner on Sunday.

Rafa Benitez's team passed the 40-point mark widely viewed as a guarantee against relegation and is 13 points clear of third-to-last Southampton with five games remaining.

Ritchie swept in a right-footed finish in the 68th minute to complete Newcastle's fightback after Alexandre Lacazette's 14th-minute opener for Arsenal.

Ayoze Perez equalized for Newcastle in the 29th.

The loss left Arsenal in danger of dropping below seventh-place Burnley with a month left of the season. Two points separate the teams and Arsenal's focus is now on winning the Europa League to qualify for next season's Champions League.

With a nod perhaps to next season, Arsenal manager Arsene Wenger paired Lacazette and Pierre-Emerick Aubameyang up front and they combined for the goal, with Aubameyang clipping over a cross that Lacazette finished on the slide.

Perez delivered a fine finish for the goal, drifting in at the near post to glance home a right-wing cross from DeAndre Yedlin.

Ritchie scored the winner against Manchester United on Feb. 11 that kickstarted Newcastle's surge to safety and he did the same here, running onto Perez's flick off Islam Slimani's header to beat Petr Cech from 12 meters (yards).

Newcastle has only lost one of its last seven games, winning five of them.