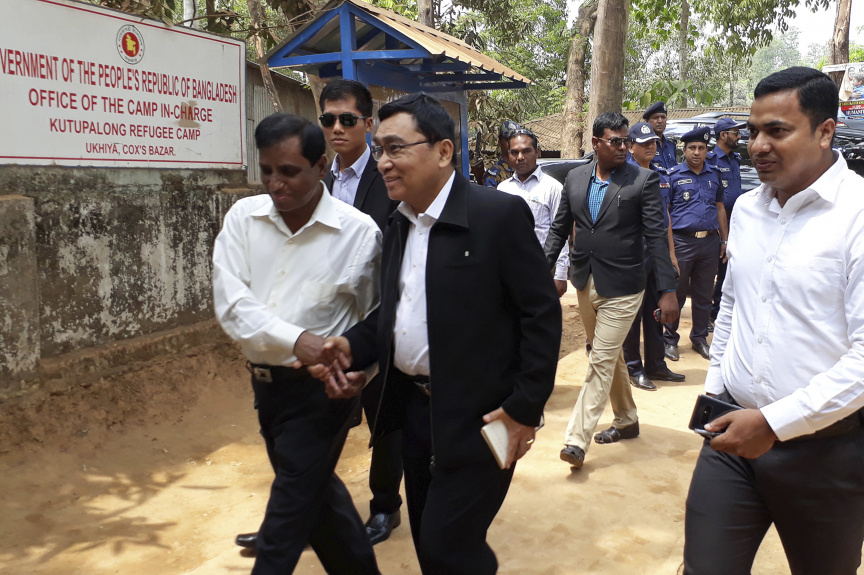 BANGKOK (AP) — Myanmar has accepted what appears to be the first five among some 700,000 Rohingya Muslim refugees who fled military-led violence against the minority group, even though the U.N. says it is not yet safe for them to return home.

A government statement said Saturday that five members of a family returned to western Rakhine state from a refugee camp across the border in Bangladesh.

The statement said that authorities determined whether they had lived in the country and provided them with a national verification card — a form of ID that doesn't mean citizenship that Rohingya have been denied in Buddhist-majority Myanmar, where they have faced persecution for decades.

It said that the family was staying temporarily with relatives in Maungdaw town, the administrative center close to the border.

The statement did not say if any more repatriations are being planned. Bangladesh has given Myanmar a list of more than 8,000 refugees to begin the repatriation, but it has been further delayed by a complicated verification process.

The two countries agreed in December to begin repatriating them in January, but they were delayed by concerns among aid workers and Rohingya that they would be forced to return and face unsafe conditions in Myanmar.

Hundreds of Rohingya were reportedly killed in the recent violence, and many houses and villages burned to the ground. The United Nations and the U.S. have described the army crackdown as "ethnic cleansing."

On Friday, the U.N. refugee agency and Bangladesh finalized a memorandum of understanding that describes the repatriation process as "safe, voluntary and dignified ... in line with international standards."

UNHCR said it "considers that conditions in Myanmar are not yet conducive for returns to be safe, dignified, and sustainable. The responsibility for creating such conditions remains with the Myanmar authorities, and these must go beyond the preparation of physical infrastructure to facilitate logistical arrangements."

Early this week, Myanmar Social Welfare Minister Win Myat Aye met with about 40 Rohingya refugees at the Kutupalong camp in Cox's Bazar in Bangladesh for more than an hour, sometimes exchanging heated words.

A Rohingya leader, Abdur Rahim, said at least eight rape victims were among those who met with him. Rahim said the group presented 13 demands for the government to meet for their return to Myanmar.

Rahim said the group became angry when Win Myat Aye said the Rohingya refugees must accept national verification cards to be provided by Myanmar in which they state they are migrants from Bangladesh.

Rohingya Muslims have long been treated as outsiders in Myanmar, even though their families have lived in the country for generations. Nearly all have been denied citizenship since 1982, effectively rendering them stateless. They are denied freedom of movement and other basic rights.

Rahim said they demanded to be recognized as citizens of Myanmar before the repatriation starts and that their security arrangements be supervised by the United Nations.

Rohingya who have been repatriated in the past after previous refugee exoduses have been forced to live in camps in Myanmar.