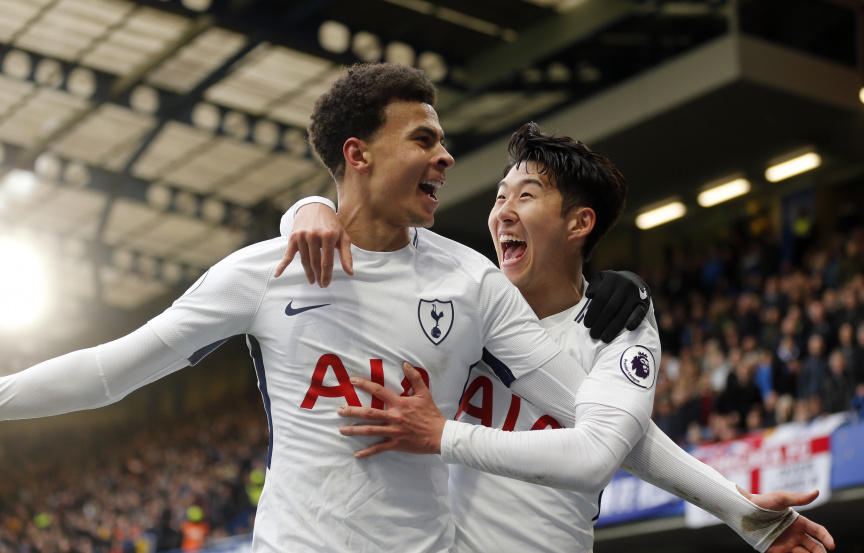 LONDON (AP) — Tottenham's 28-year wait for a victory at Chelsea is over.

By coming from behind to win 3-1 at Stamford Bridge on Sunday, Tottenham shook off a hoodoo that's been a burden for the north London club throughout the entire Premier League era.

But it's about more than symbolism or a day's bragging rights.

Chelsea won't only be surrendering the Premier League trophy to Manchester City but facing a season out of Europe's elite competition.

Tottenham, in the fourth and final Champions League place, widened the gap to fifth-place Chelsea to eight points. Arsenal, which beat Stoke 3-0 in Sunday's other game, is five points further back.

Qualifying for the lucrative Champions League for a third successive season is more significant for a team that had only contested the European Cup twice in its history before Mauricio Pochettino took charge in 2014.

"To create a winning mentality you have to get good results in big stadiums like Bernabeu or Stamford Bridge," Pochettino said, reflecting on the draw at Real Madrid earlier in the season and Sunday's success. "Four years ago ... the idea was to reduce the distance to the top four. That was the first target and we've done that."

While Pochettino could eventually savor the praise in west London, it initially looked like he would be facing questions about his goalkeeper. In the end, Pochettino didn't face a single question after the match about Hugo Lloris' early blunder that allowed Chelsea to take the lead after 30 minutes.

Lloris came off his line to meet a cross from Victor Moses but missed the punch, allowing Alvaro Morata to head in his first league goal in more than three months.

Tottenham didn't capitulate. And the planned route to goal was clear when Eriksen tried his luck from distance five minutes before halftime.

The Dane did find the net in stoppage time and Willy Caballero will be wondering just how. Receiving the ball from Alli 25 yards from goal, Eriksen unleashed a thunderous strike that appeared to be heading to the center of the net before swerving to the right.

"We nicknamed him lovingly 'Golazo' (great goal) because he has a great talent, a great strike, technique and he makes the team play," Pochettino said.

Chelsea was hit by a double-punch by Alli in a four-minute spell in the second half.

Alli brought down Eric Dier's high ball with one touch and used his second to lift the ball past Caballero in the 62nd minute.

Alli exploited defensive dithering for the second. While Caballero twice blocked Son Heung-min, Andreas Christensen failed to adequately clear and Alli pounced for his eighth goal of the season.

Not bad for a player who Gareth Southgate only deployed for 22 minutes in England friendlies against the Netherlands and Italy during the international break.

At Chelsea, it is manager Antonio Conte who might need helping. The Italian, who won the title in his first season, is facing the risk of being dismissed at the end of his second campaign after an alarming slump to fifth.

"I don't know, you have to ask the club, not me," Conte said. "The club has to take the decision. But I repeat. I am not worried about this."

Alexandre Lacazette made a scoring return to the Arsenal side after a seven-week injury layoff.

With fourth place increasingly out of sight for Arsenal, beating Stoke was just about being in the right shape for the Europa League quarterfinals. The first leg is on Thursday against CSKA Moscow in the competition that provides Arsenal's only route into the Champions League if the trophy is collected.

But it was a lackluster performance against Stoke, with jeers in the Emirates Stadium from the home fans who did turn up.

The deadlock was broken in the 75th minute by Pierre-Emerick Aubameyang from the penalty spot after Bruno Martins Indi was penalized for fouling Mesut Ozil despite appearing to win the ball.

Aubameyang grabbed a second but was denied a hat trick when Lacazette took the second penalty after being fouled by Badou Ndiaye.