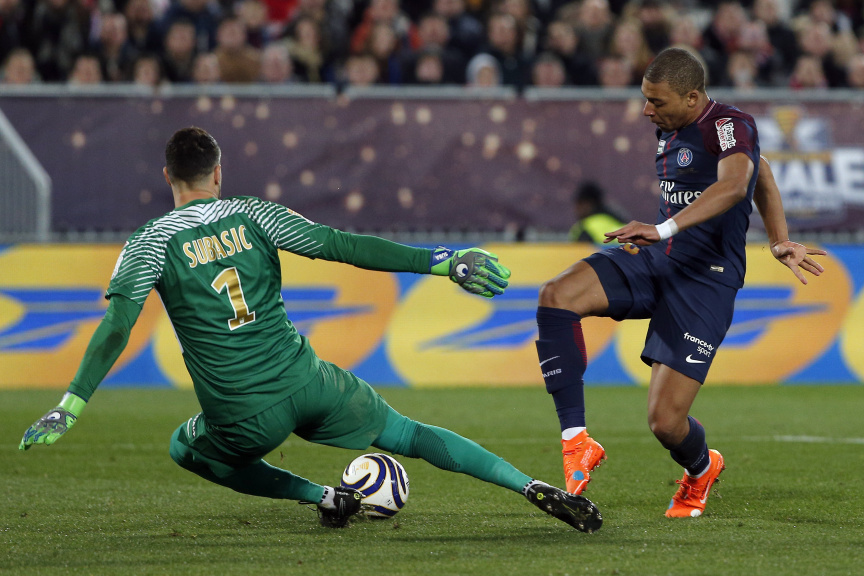 PARIS (AP) — Paris Saint-Germain won the French League Cup for a fifth straight time, reasserting its dominance on the domestic stage by beating Monaco 3-0 in the final on Saturday.

Edinson Cavani scored a brace and Kylian Mbappe was the man of the match for his involvement in all three goals.

Mbappe was a constant threat at Matmut Atlantique Stadium in Bordeaux with his penetration and pace. The France striker won the penalty converted by Cavani in the first half, set up Angel Di Maria with a splendid pass, and assisted Cavani for the Uruguay striker's second.

Cavani's goals were his 34th and 35th in all competitions.

"I've always said that I want to be decisive, and I did it," Mbappe said. "But what really matters is the collective performance."

PSG, which relinquished its French league crown to Monaco last season but routed the Principality side 4-1 in last year's League Cup final, claimed a record-extending eighth title in the competition.

PSG is unbeaten in 40 domestic cup matches, since January 2014 when it lost to Montpellier 2-1 in the French Cup.

After a minute of applause for the victims of a deadly attack in southern France last week, PSG immediately took control of the ball.

Mbappe created havoc in the Monaco defense with a series of dribbles in front of the area and won a penalty when he was fouled by Kamil Glik. Cavani took the spot kick and beat Monaco goalkeeper Danijel Subasic.

PSG deservedly doubled its lead at the conclusion of a quick counterattack after Mbappe delivered a superb through pass for Di Maria on the left side. The Argentine winger collected the ball on the edge of the box and scored at the near post with a low shot.

As the tempo rose, Radamel Falcao thought he scored in the first half when he took advantage of a botched clearance attempt from PSG goalkeeper Kevin Trapp to head the ball into the back of the net, but the goal was disallowed for offside. Trapp was decisive before the interval with saves off a shot from Lopes and a rebound effort from Thomas Lemar.

Cavani, PSG's all-time top scorer, sealed the win when he wrong-footed Subasic with a low shot.

With a massive 17-point lead over Monaco at the top of the French league, PSG is aiming for another domestic treble to ease the pain of another early European exit. With the French title all but secured, Unai Emery side's next goal will be to reach the French Cup final.

MARSEILLE IN THE HUNT

Dimitri Payet had an assist and scored late as Marseille overcame Dijon 3-1 in the French league.

The win could prove pivotal in the fight for Champions league qualification for Marseille, which extended its lead over fourth-place Lyon to five points. Lyon hosts Toulouse on Sunday.

Payet was not selected by coach Didier Deschamps for France's latest friendlies against Colombia and Russia but continued his good run of form. Payet has provided nine assists this season, including six over the past three months.

Marseille controlled the game in the first half after striker Valere Germain opened the scoring in the 36th minute from close range on the counterattack from Payet's cross.

But the visitors showed too little to ever really threaten after the interval and were made to pay for their apathy when midfielder Kwon Chang-hoon scored 80 seconds after going in as a substitute. The South Korean snatched his seventh goal this season with a fine volley from Oussama Haddadi's precise cross.

With 17 minutes left, Marseille players showed their strength of character with a press that resulted in Lucas Ocampos' goal in the 88th.

The Argentine forward won a penalty in stoppage time that Payet failed to convert with a weak shot down the middle. Payet had another chance from the spot soon after and this time made no mistake to seal Marseille's win.