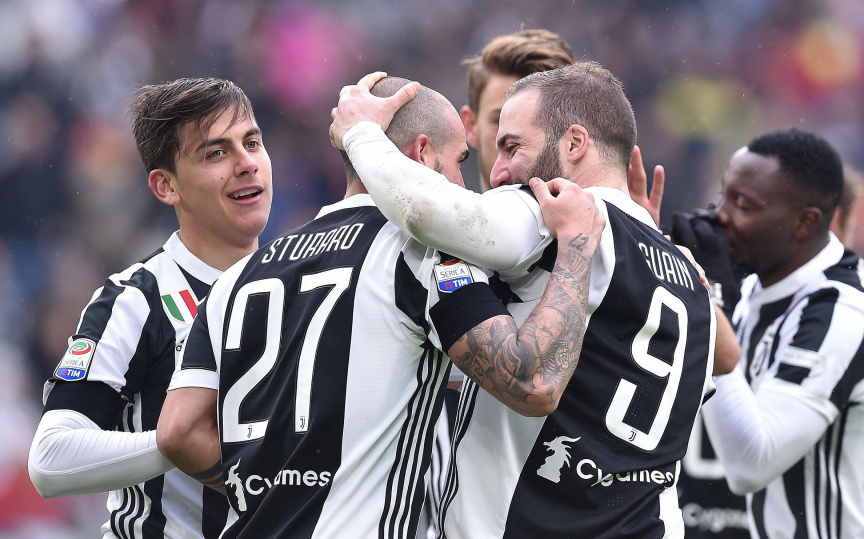 Juventus' Paulo Dybala, left, celebrates with his teammates Stefano Sturaro and Gonzalo Higuain, right, after scoring his side's second goal during a Serie A soccer match between Juventus and Udinese, at the Allianz Stadium in Turin, Italy, Sunday, March 11, 2018. (Alessandro Di Marco/ANSA via AP)

MILAN (AP) — Juventus took another step toward an unprecedented seventh successive Serie A title after Napoli had a setback on Sunday.

Juventus leapfrogged Napoli at the top of the table with a 2-0 win over Udinese to take a 1-point lead. Maurizio Sarri's Napoli could only draw 0-0 at Inter Milan in the evening match.

The Bianconeri could move four points clear of Napoli on Wednesday if they beat Atalanta at home in a match which was rescheduled due to bad weather.

"We're just thinking of ourselves," said Lorenzo Insigne, who went close for Napoli on several occasions at San Siro. "So many people, to put pressure on us, are saying that the title is gone, we just have to think about working.

"As long as we're mathematically in it, we'll fight to win, without ever letting our heads go down. We have to stay calm ... we didn't win today but we had a good performance and we have to start again from that."

Napoli, which lost at home to Roma last weekend, almost fell to a second successive defeat as Inter went closest to breaking the deadlock when Milan Skriniar headed a free kick off the right post early in the second half.

The southern side hasn't won the Italian league since Diego Maradona led the club to its only two championships in 1987 and 1990.

Earlier, Juventus had a comfortable victory — despite Gonzalo Higuain missing another penalty — thanks to two goals from Paulo Dybala.

Paulo Dybala broke the deadlock in the 20th minute, curling a trademark free kick into the top corner.

Higuain should have doubled his side's lead after Dybala was fouled in the area by Gabriele Angella, but he saw his penalty saved by Udinese goalkeeper Albano Bizzarri shortly before halftime.

It was the fifth penalty Higuain has missed in Serie A.

Higuain made up for his error by setting up Dybala's second goal four minutes after the break.

Dybala has scored four goals from his last three matches.