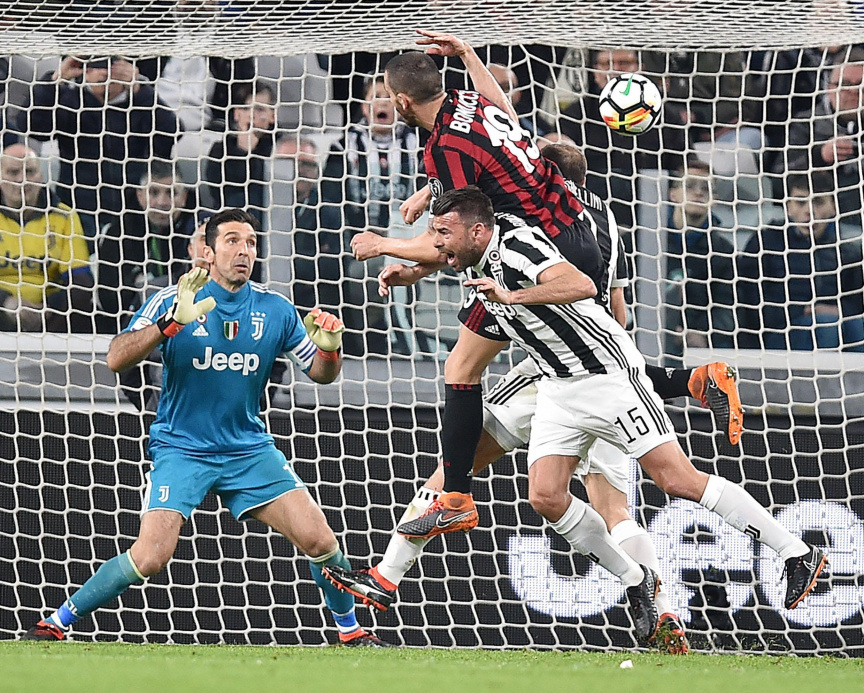 Milan's Leonardo Bonucci scores his team's first goal during the Italian Serie A soccer match between Juventus and Milan at the Allianz Stadium in Turin, Italy, Saturday, March 31, 2018. (Alessandro Di Marco/ANSA via AP)

MILAN (AP) — Leonardo Bonucci's goal on his return to former team Juventus ultimately counted for nothing as the Bianconeri beat AC Milan 3-1 to move four points clear in Serie A on Saturday.

"It was pre-written," Juventus manager Massimiliano Allegri said. "He scored on his return but Juventus won, no one could have imagined a better night."

Bonucci cancelled out Paulo Dybala's opener in the first half and Hakan Calhanoglu rattled the crossbar as Milan surprisingly outplayed the six-time defending champion.

But Juan Cuadrado and Sami Khedira struck late for Juventus.

Second-placed Napoli slipped further behind after drawing at Sassuolo 1-1.

Juventus drew at lowly Spal 0-0 last time out, and this will boost it ahead of the Champions League quarterfinal against Real Madrid on Tuesday.

All 10 matches were played on Saturday because of Easter.

Juventus got off to the perfect start when Dybala fired it in front with a powerful shot from outside the area in the eighth minute.

Andre Silva headed wide from six yards and Milan leveled in the 28th minute when Bonucci got between his former teammates Andrea Barzagli and Giorgio Chiellini to head in.

It was Bonucci's first match at Juventus since his surprise exit in July after seven years at the club, and his every touch was met by jeers and insults. The Italy defender celebrated with a wash-your-mouth action.

It was the first league goal Juventus conceded this year.

Milan almost took the lead 10 minutes after the break as Calhanoglu's effort crashed off the crossbar and Gianluigi Buffon turned Suso's follow-up round the post.

Cuadrado was brought on for his first appearance of 2018 on the hour and he marked his return from injury with a goal 19 minutes later, heading in Khedira's cross.

Khedira got on the scoresheet himself three minutes from time following a low cross from Dybala.

It was a blow for Milan, which slipped eight points off fourth place and the final Champions League qualifying berth — occupied by Inter Milan, which it faces in the derby on Wednesday.

"This result hurts ... we played really well," Milan manager Gennaro Gattuso said. "It wasn't so long ago that the Champions League was an unattainable fantasy."

Matteo Politano almost joined Napoli in January. He could have just cost the southern-based club the Serie A title.

Napoli was desperate to sign Politano in the January transfer window but failed to get the paperwork completed in time.

He showed Napoli what it missed when he volleyed in a rebound in the 22nd minute after Federico Peluso headed Stefano Sensi's free kick off the right post.

Napoli leveled 10 minutes from time when Jose Callejon turned in Mario Rui's low cross to the back post.

Napoli threw everyone forward and substitute Arkadiusz Milik hit the crossbar with an overhead kick.

"It's two points lost, we're disappointed," Napoli coach Maurizio Sarri said. "We created a lot but we're in a period where we're struggling to convert chances."

The race to be Serie A top goalscorer is heating up with leading candidates Ciro Immobile and Mauro Icardi both scoring twice.

Icardi scored four in Inter's 5-0 win at Sampdoria before the international break and he resumed where he left off, firing his side in front after just 38 seconds and doubling his tally early in the second half.

Inter, which faces AC Milan in the derby on Wednesday, remained in fourth spot. It leads Lazio by one point after the capital side survived a scare when bottom side Benevento took a 2-1 lead in the second half despite playing from the seventh minute with 10 men after goalkeeper Christian Puggioni was sent off for handling the ball outside his area.

Midfielder Radja Nainggolan limped off after just 16 minutes, and is a serious doubt to face Barcelona in the first leg of the Champions League quarterfinals on Wednesday.

Genoa missed a penalty but netted another in a controversial 1-1 draw against Spal, which moved two points above the relegation zone after 10-man Crotone lost at Fiorentina 2-0.