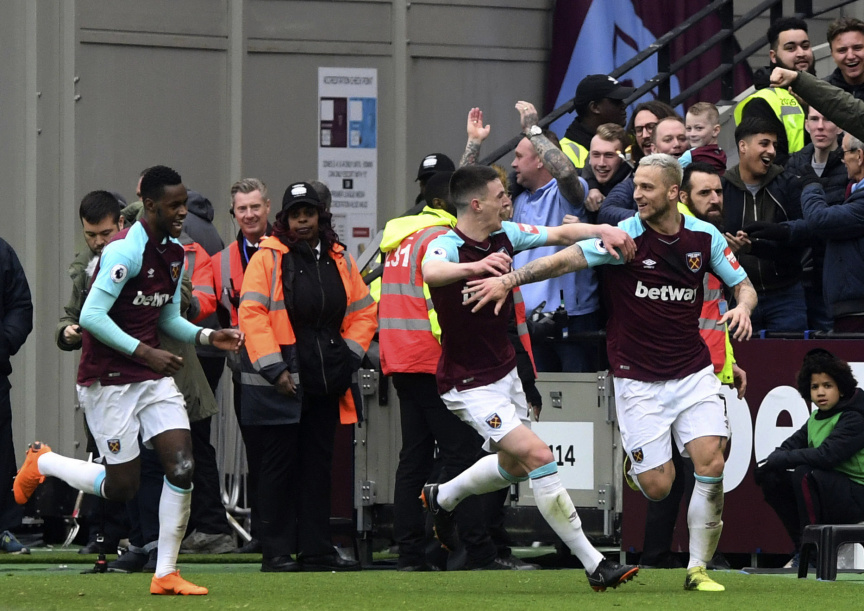 LONDON (AP) — The West Ham mutiny was soothed by a resurgent performance producing a 3-0 victory over a listless Southampton, coupled with heightened security at the Olympic Stadium on Saturday.

Marko Arnautovic's double after Joao Mario's opener ensured there was an unfamiliar soundtrack at the stadium unloved by so many West Ham fans: Cheers and applause.

"It's good news all round," the stadium announcer told fans after the final whistle. "Have a look at the table."

Still, a relegation battle is not what West Ham envisaged when it moved into the stadium that was the centerpiece of the 2012 Olympics.

It's why West Ham fans are so restless. And it's why additional police officers patrolled the east London venue while stewards in football boots were stationed around the pitch ready to race onto the pitch to prevent a repeat of the invasions that blemished the last home game three weeks ago.

While there were protests outside the stadium against the West Ham hierarchy, early goals ensured joint-owners David Sullivan and David Gold had an afternoon without being targeted with missiles or throat-slitting gestures from fans as they endured during the previous fixture.

Having the fans back on side was crucial, banishing the toxic atmosphere for one afternoon at least.

"The players showed how they felt about past events, they were pent up and ready to go," West Ham manager David Moyes said. "I thought before kickoff the supporters showed they are with the club and with the team, and then the players showed what they were going to do. They really kicked on."

Few sides will surrender as meekly as Southampton, which was being managed for the first time in the league by Mark Hughes.

After winning only one of its last seven games, West Ham took the lead in the 13th minute when the unmarked Mario met Cheikhou Kouyate's cross. Arnautovic was on target in the 17th after an initial header was saved, and again with a volley in first-half stoppage time.

"I was raging when he missed an early chance," Moyes said, "but he got two more so good on him."

Arnautovic celebrated both goals in front of Hughes in a fraught reunion with his former manager at Stoke.

"I wasn't aware he was shouting in my direction," Hughes said. "You'd have to ask him what he said, I have no idea. Bless him."

Back in the Premier League after being fired by Stoke in December, Hughes offered little to suggest he can keep his new team in the top-flight with Southampton in a perilous state.

"We conceded three very poor goals," Hughes said. "There were some catastrophic errors which have been prevalent for some time and clearly we need to do something about it."

West Ham is on the rise again. Next up, though, is a testing derby at Chelsea and games in April against Arsenal and runway leader Manchester City.

"Unfortunately, we're either very good or we're not at all," said Moyes, who succeeded the fired Slaven Bilic in November. "What I need to do is try and bring a bit of consistency to the standard at West Ham. What I mean by that is when our performances drop, I need to find a way that it's not dropping as much as it has on a couple of occasions."

Both Moyes and Southampton counterpart Mark Hughes are in a relegation scrap having previously been in charge of the more illustrious Manchester clubs.

Moyes was dumped as Alex Ferguson's United successor in 2014 after less than a season with the Community Shield his only honor. Hughes was dismissed by City in 2009, a year into the Abu Dhabi ownership before getting a chance to secure silverware.

Both have reputations to rehabilitate, and that means avoiding dropping into the League Championship.

"It's not going to be easy," Hughes said. "I knew that when I took over. It was always going to test everybody connected with Southampton. So, we've got to suck it up, take it on the chin, dust ourselves down."