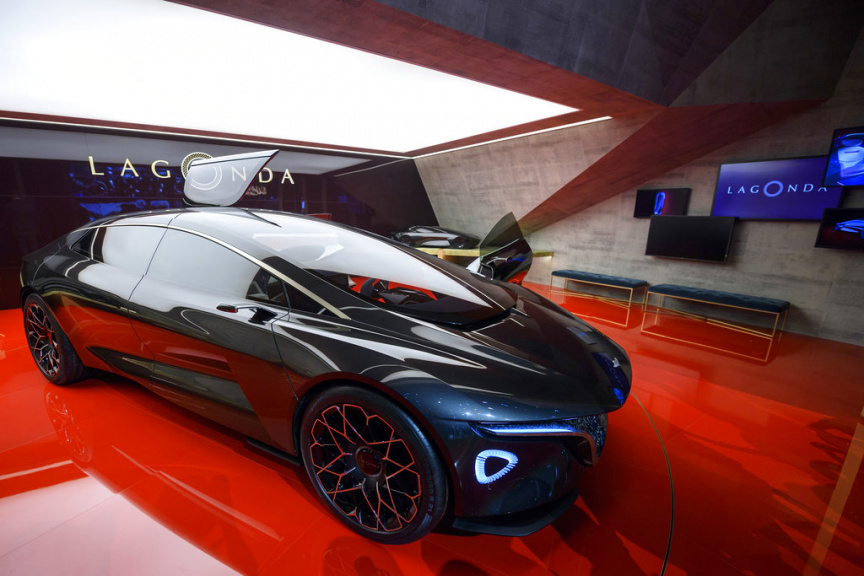 GENEVA (AP) — The Latest on developments at the Geneva International Motor Show (all times local):

With a cashmere and silk interior inside a futuristic frame, Aston Martin is going electric — in what the legendary British automaker is billing as the first luxury brand with zero-emission powertrain technologies.

The high-end car company has spun out its Lagonda "Vision Concept" that some automotive watchers call the standout item at a Geneva auto show already rife with eye-catching items.

The sleek, slim-line concept has doors open in to each other and a top hatch for easy entry. With the battery under the floor and armchair-like seats that swivel around, one attraction is roomy interior space. The seats have red epaulets, and the inside has details of red Melton fabric — the traditional material used by the queen's Welsh guard, said Steve Platt, lead interior designer at Aston Martin.

At a presentation as booming and flashy as its cars, Ferrari has unveiled its 488 Pista speedster at the Geneva auto show. It features lighter weight than its predecessor and the most powerful V8 engine ever produced by the fabled Italian brand.

At Ferrari, image matters a lot — and the automaker blasted out a 110-decibel video of vehicles speeding along a racetrack to convey the power and noise of its vehicles, sending powerful vibrations through the rubbernecking audience and shaking the floor of the cavernous Geneva showroom.

Galliera noted the importance of "exhilarating sound" at Ferrari, "which always represents part of the emotion of driving a Ferrari."

He said the Pista rounds out the Ferrari product range, which he considers the company's most effective yet.

The head of Ford Motor Co.'s European business says the division's profits will improve this year over last and that the company remains on track to meet Europe's tougher carbon dioxide standards.

Steven Armstrong said that European sales indicated "a good start to the year" and that "we expect profits in '18 to be better than in '17."

Ford of Europe made $234 million pre-tax last year despite the impact of Britain's planned departure from the European union and losses on unspecified warranty issues.

Armstrong, who is head of Europe, Middle East and Africa, said Ford would meet the EU's new, tougher standard for greenhouse gas emissions in 2020-2021 through a mix of diesel and fuel-efficient gasoline engines as well as the rollout of hybrid and battery-only vehicles.

French automaker Renault has unveiled its futuristic — and funky — concept car EZ-Go, featuring a rooftop opening that allows passengers to enter by a ramp for easy access.

Envisioning smaller-scale public transport for increasingly populated cities, Renault has constructed a vehicle with a numeric display on the front and back, a bit like the screen on a bus.

The six-seater self-driving electric vehicle aims to bridge public and private transportation needs, with options like on-demand pickup like by a taxi.

Passengers sit around the windows in U-shaped seating. Seemingly almost symmetrical from the side, the tail lights and the opening hatch are the main ways of telling front from back.

Presenting the vehicle, Renault Chief Operating Officer Thierry Bollore called it an "urban, 'robo-vehicle' electric concept that can be tailored for public and private services."

Head of design Laurens van den Acker floated the prospect that EZ-Go might one day become "part of a city's calling card, like the yellow cabs in New York or the black cabs in London."

Global carmakers are showing off a mix of low-emission electric vehicles and high-end sports cars at the Geneva International Motor Show.

Many of the new offerings display the battery-electric and autonomous technology carmakers say they need to meet tough emissions standards and cope with an expected shift to cars as a service to be ordered rather owned.

Mercedes-Benz rolled out its EQA concept car, a compact battery electric vehicle with a virtual radiator that changes appearance depending on the selected driving program.

Volkswagen's I.D. Vizzion large electric sedan was shown in an autonomous version without a steering wheel.

Big horsepower and fossil fuels remained very much in evidence however.

Warehouses in Male' to be moved to industrial zone