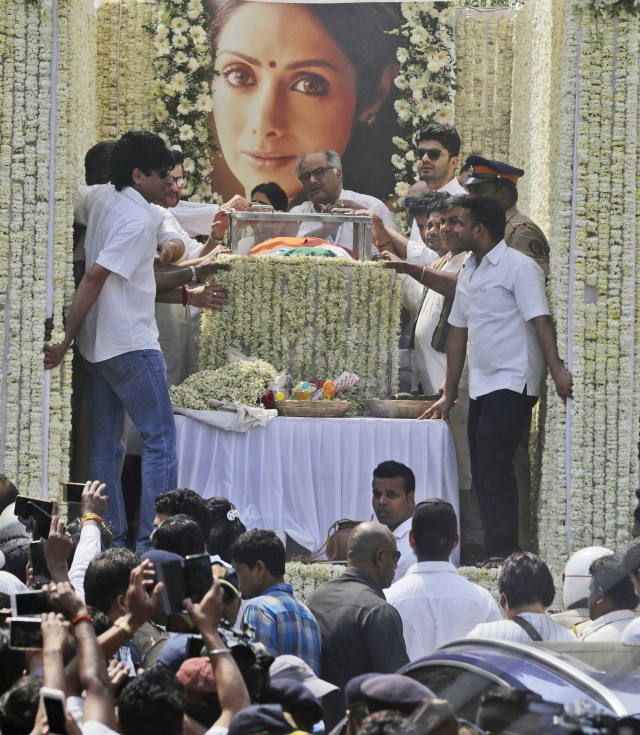 MUMBAI, India (AP) — Lining up for hours and visibly grief-stricken, thousands of mourning fans paid their respects to Bollywood icon Sridevi, who redefined the importance of the lead actress in India's male-dominated film industry.

She died in Dubai over the weekend and her body was flown home late Tuesday night in a private plane owned by Anil Ambani, a Mumbai industrialist and entertainment baron.

By early Wednesday morning, people were lining up along a security fence outside the private club near Sridevi's home where the body had been laid out. A string of Mercedes and Audis ferried family members, Bollywood stars and VIPs through another gate, with squadrons of guards maintaining control.

One mourner, a man who gave his name only as Prashant, arrived at about 7 a.m., hours before anyone was to be allowed in.

"No matter how long I have to wait, I will wait," he said, clutching a small bouquet of flowers. "I'll wait until I'm able to pay my respects."

"I saw all her movies," he said, grief clearly visible on his face.

Inside the club, the actress's body was placed on a raised platform in a hall decorated with flowers. Her extended family, including her husband, producer Boney Kapoor, and her two daughters, stood by the platform as fans and colleagues walked past in respect.

While the family had requested that all media leave their cameras outside while viewing her body, some photographs emerged on news sites and showed Sridevi's body dressed in a vibrant magenta and gold sari with a heavy gold necklace around her neck and a large red bindi decorating her forehead. The mark many Indian women wear is colored red to signify the wearer married.

By late afternoon, her body, wrapped in an Indian flag, began its journey from the club to the crematorium where her funeral took place according to Hindu customs. The body was carried in a truck decorated with flowers and a giant poster of the actress. It passed the crowds of fans standing by the side of the street in Mumbai, the western coastal city that is home to the Indian film industry.

Sridevi, 54, was in Dubai for a wedding in her extended family when she drowned in a hotel bathtub Saturday after losing consciousness. Investigators said alcohol was found in her system but concluded her death was accidental and closed their case Tuesday and handed the body to her family.

Condolences have poured in since the death of the actress, who redefined the importance of the female lead in India's largely male-dominated film industry.

Sridevi, who used only one name onscreen, had been a child actress and worked in regional films in southern India before making her Bollywood debut in the late 1970s.

By the late 1980s, she was a name to reckon with in mainstream Hindi-language films and was able to command top billing and dominate screen space in a film industry in which the heroine's role was largely relegated to a few songs and a handful of romantic scenes as the leading man's love interest.

Despite a life spent entirely in the movie business, Sridevi was quiet and shy on film sets until she faced the camera, colleagues recalled, with several saying she would "transform" into the character she was playing.

In 1997, she married Kapoor, a producer on many of her films, and stepped away from cinema for many years while she raised her two daughters.

Sridevi returned to films in 2012 with "English Vinglish," where she played a quiet housewife who remains largely in the background until she decides to learn English to fit in with her family.

In 2017, she starred in "Mom," playing a woman out to seek vengeance for the rape of her teenage stepdaughter.

Over the last few years, Sridevi had been grooming her older daughter, Janhvi Kapoor, for her debut Bollywood film slated for release later this year.

John Mahoney, who played cranky dad on 'Frasier,' dies at 77