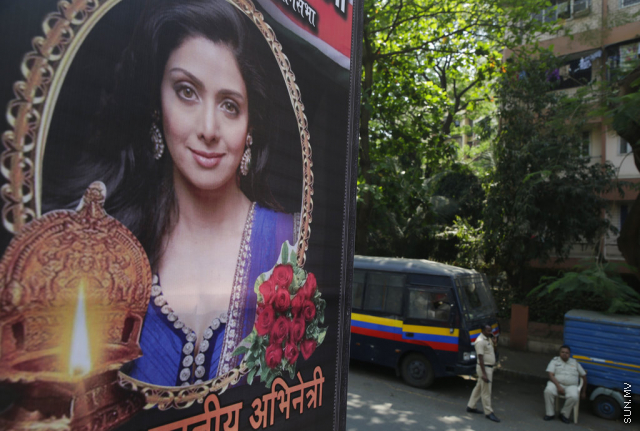 DUBAI, United Arab Emirates (AP) — Dubai investigators closed the case on Tuesday into the death last weekend of Indian movie icon Sridevi, calling it an accidental drowning. Her family has been given permission to take her body back to India, officials said.

The 54-year-old Sridevi, who was known by only one name, drowned in a hotel bathtub after losing consciousness, officials say. Police officials in Dubai have said the autopsy also revealed alcohol in her system.

"The case has now been closed," the state-run Dubai Media office tweeted.

Her death has been front-page news in India, where Bollywood stars command an almost-mythical status. Fans have been gathering in front of the Mumbai home of her brother-in-law, the prominent actor Anil Kapoor.

The coverage has been both lurid and restrained, with one TV station showing a reporter talking about her death from inside a bathtub, and many newspapers not even mentioning the alcohol reports.

Indian media reported that Anil Ambani, a wealthy Mumbai-based industrialist, dispatched a private plane to Dubai to carry Sridevi's body back home. It was not immediately clear when that would happen.

Sridevi was the most famous Bollywood actress of the 1980s and '90s, and the first woman to get top billing in an industry then completely dominated by men. Starting out as a child star in south Indian regional movies, she became known as an adult for her impeccable comic timing as well as her dancing skills — a serious asset in a country where song-and-dance melodramas are a movie staple.