Still no cease-fire in Syrian enclave; Russia orders a pause 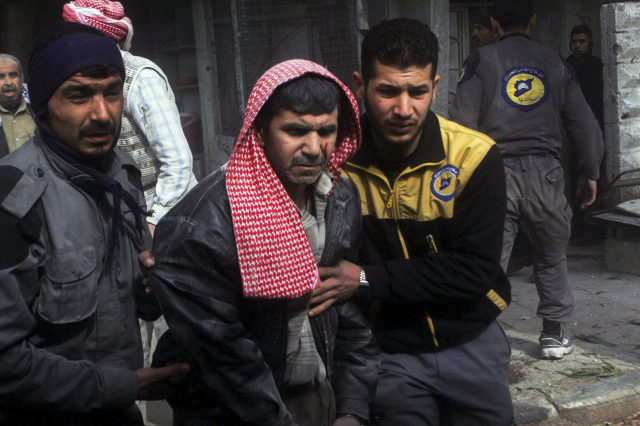 BEIRUT (AP) — As a U.N. cease-fire failed to take hold in Syria, Russia on Monday ordered a daily "humanitarian pause" to allow civilians to evacuate an embattled rebel-held enclave near Damascus, while airstrikes continued and Syrian ground forces fought to push into the besieged area from the west.

"It is like legitimizing the strikes on civilians," said activist Firas Abdullah, a resident of Douma, a town in the region where at least 13 members of a family were killed Monday when their home collapsed after an airstrike.

"They will be so kind to grant us a mere five hours when they will not bomb us. Then the rest of the day, they will bomb us as usual. It is like a permission to kill," Abdullah said.

A weekend resolution approved by the U.N. Security Council for a 30-day cease-fire across Syria failed to stop the carnage in the eastern Ghouta region that has killed more than 500 people since last week.

At least 34 people were killed Monday by airstrikes and shelling, according to the Syrian Observatory for Human Rights. The U.N. estimates that nearly 400,000 people live in dire conditions from the siege in eastern Ghouta, which has been under intensive bombing by government forces for weeks.

Other Ghouta residents also scoffed at the Russian move, saying it reminded them of a similar one for a besieged eastern district of Aleppo in 2016.

Maj. Gen. Yuri Yevtushenko, head of the Russian military's Center for Reconciliation in Syria, said Syrian authorities set up a "humanitarian corridor" for evacuating civilians and would distribute leaflets with specific information. He said the al-Qaida-linked militants and some rebel groups in eastern Ghouta are preventing civilians from leaving and using them as human shields while continuing to shell Damascus.

"This (Russian) decision nullifies the legitimacy of the United Nations," Mohammed Alloush of the Army of Islam told The Associated Press. "We want a total and lasting cease-fire in accordance with the U.N. resolution and one that opens corridors for humanitarian aid."

On Sunday, activists reported a suspected poison gas attack in eastern Ghouta's town of Sheifouniyeh, where at least one person — an infant — was killed.

The attack also left several people and paramedics with breathing difficulties, according to the opposition's Syrian Civil Defense, a group known as the White Helmets. The Ghouta Media Center, an activist collective, also reported the incident, saying chlorine gas was used. The Observatory said it could not confirm the reports.

The Syrian American Medical Society, a medical relief organization working with doctors in Syria, said it was the fourth time this year that a chemical weapon was used in Ghouta. SAMS also said 24 health facilities in Ghouta came under attack over the last week.

Meanwhile, Syrian TV reported a three=pronged ground attack on Harasta, a major town in the region. The state TV broadcast live video from the town as it was pounded by airstrikes and artillery.

U.N. Secretary-General Antonio Guterres appealed to the warring sides to abide by the cease-fire.

"Eastern Ghouta cannot wait," Guterres said at the start of a session of the U.N.-backed Human Rights Council in Geneva, his first remarks to the U.N. body since the Security Council resolution was adopted Saturday. "It is high time to stop this hell on Earth."

Guterres said he welcomed such resolutions but added that they "are only meaningful if they are effectively implemented."

He said he expects the resolution "to be immediately implemented and sustained" and also called for safe, unimpeded and sustained delivery of humanitarian aid and services, as well as evacuations of the sick and wounded.

Jonathan Allen, the British ambassador to the U.N., said Russia and all other Security Council members are "obliged" to do everything possible to implement the U.N. resolution.

The Russian announcement of five-hour daily pauses in eastern Ghouta "is not compliance, that is not implementation of the resolution passed on Saturday, but it does show that it can be implemented," Allen said.

"However, we have every reason to remain cautious" about the cease-fire because airstrikes were continuing on the Damascus suburbs, he said.

Abdullah, the Douma activist, also derided the U.N. cease-fire, saying it was "confined to the U.N. Security Council corridors." He noted his town was hit Monday by at least 50 mortar rounds, as well as artillery shells and airstrikes.

Russia supports the forces of Syrian President Bashar Assad in their assault on eastern Ghouta, as it did in the 2016 campaign that drove the rebels from the enclaves they controlled in Syria's largest city, Aleppo.

At that time, a humanitarian pause also was implemented by Russia while the Syrian government called on residents to evacuate and for gunmen to lay down their arms. A full ground assault followed, finally bringing Aleppo under government control.

Then, as now, Assad's government and Russia cited the presence of al-Qaida-linked groups as grounds for the sweeping operation.

In the ground offensive in Ghouta, Syrian TV said the fighting, mostly concentrated in an area known as Harasta Farms, also was aimed at al-Qaida-linked militants.

Eyad Srewel, a 27-year-old resident of Douma, said the situation in Ghouta looks more and more like Aleppo.

"I don't know what will happen in the next two minutes. But I know I am not leaving, I am not going anywhere," he said.