President: Will ask for India’s assistance if CMAG takes unfair action against Maldives 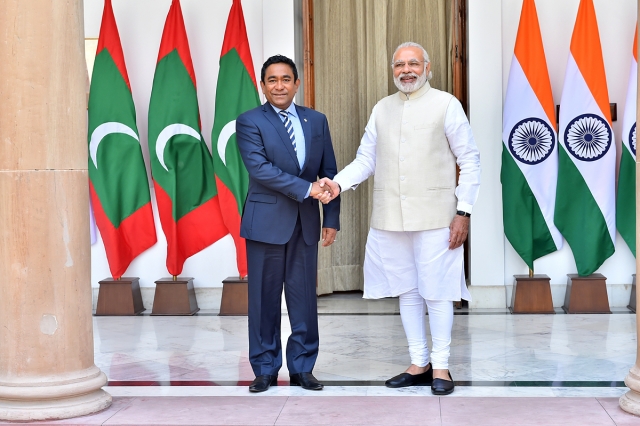 Maldivian President Abdulla Yameen has said that he will ask for India’s assistance if Commonwealth Ministerial Action Group (CMAG) takes any unfair action against Maldives.

During the joint press conference with Indian Prime Minister Narendra Modi on Monday, Yameen – who is on a two-day state visit to India, said that he wanted to thank Indian government for backing Maldives in the scuffle with CMAG.

“We will ask for India’s assistance if CMAG decides to take any unfair sanctions against Maldives in the future as well,” said Yameen during the press conference.

He said that he was saddened that unfair action was taken against countries such as Maldives which had ties with international community, and followed example sent by international organizations.

“What we are trying to do is follow the example set by international organizations to uphold democracy, diplomacy and laws,” said Yameen.

Yameen said that it was very likely CMAG would target Maldives again. And that revolutionary economical changes by the government was not the only change being brought by his administration.

“Maldives is improving how the country is run. This is also what is most important. We are taking assistance from India and Singapore in this,” he said.

Yameen said that he knew that India was always ready to provide assistance to Maldives in anything in anything they needed. And that he wanted to prove to the world that mutually beneficial deals could be made between countries such as Maldives and India – despite the huge difference in size.

He said that Maldives was a small country undertaking huge changes. And that his target was to establish a modern economy in the country – which would satisfy the needs of the youth.

He said that forgetting about the youth could contribute to increase in extremism – which would increase the threat of terrorism in the region.

“I, myself and Prime Minister Modi are of the same mind in removing the threat of terrorism.

Maldives and India will work together to remove threat of terrorism from this region,” said Yameen.

Yameen is set to conclude his visit to India and return back to the country on Monday night.