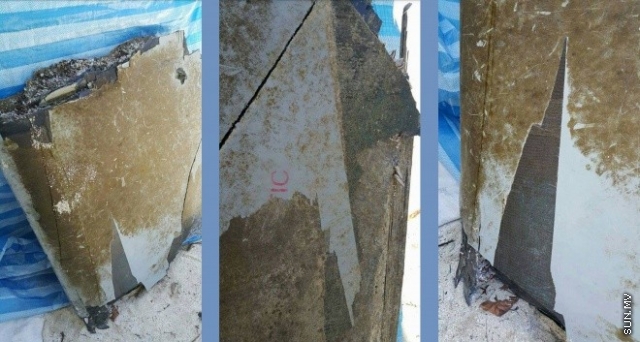 A team from Maldives Police Service has gone to Banyan Tree resort in K. Atoll to investigate the suspected plane debris found on the beach at the resort.

An official from the resort told Sun Media that a team from the Serious and Organized Crime Department of the Police has been active on the island since 3:15 p.m. today.

“The investigation team from the police are now meeting with the management of the resort and gaining information about the things found.” Official said.

The official said that a five to seven inch piece among the debris found is still left on the island and the management has decided to hand it over to the Police.

“Although some of it was taken to Thilafushi, there is still a five or a seven inch piece on the resort. It was left because it is small. The management has decided to hand it over to the Police.” Official said.

The case arose when someone posted the pictures of the pieced found on the resort on Facebook.

The man who posted the pictures says that they were taken on 31 May of this year.

The official from the resort said that they don’t know if the pieces sent to Thilafushi has been destroyed or not. And it would be difficult to destroy as well.

A few days ago, parts of a plane were discovered on Reunion Island in the Indian Ocean.

Prime Minister of Malaysia, Najib Razak has said that the French investigation team has confirmed that the plane debris discovered on island are in fact parts of the missing Malaysian Airline flight 370.

The last contact from the plane last year after the plane took off from Kuala Lampur International Airport to China. The plane’s signal was lost after an hour after it’s takeoff and to this day has been missing.

The plane took off to Beijing with 152 Chinese nationals. Along with the crew, the plane had 293 souls on board.

Protestors against foreign ownership of land