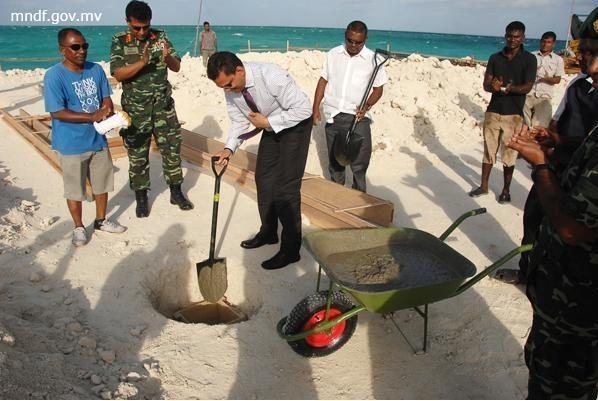 The foundation stone has been laid today for a mosque as the first building to be constructed at Uthuru Thilafalhu, an area under development by Maldives National Defence Force (MNDF).

MNDF said that the development of Uthuru Thilafalhu is part of the road map for the first 100 days of the new administration, as announced by Minister of Defence Mohamed Nazim earlier.

The mosque, financed by anonymous donations, will have a capacity of 100 people.

Uthuru Thilafalhu project is carried out by MNDF’s welfare company, established to strengthen and promote the welfare of MNDF personnel.

The first phase of the project, which includes the establishment of a dockyard for Coast Guard vessels, will be completed in January 2014.

The Uthuru Thilafalhu project was inaugurated by Defence Minister Mohamed Nazim on 18 August 2013.