I do not accept that I gained only five percent of votes: President Waheed 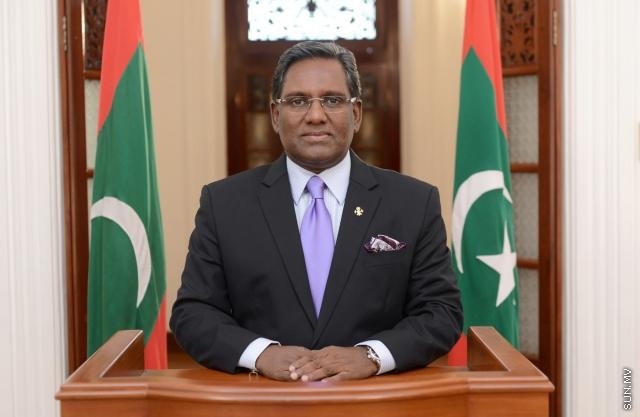 President Dr Mohamed Waheed has said that he does not accept the result of the election in which he gained only five percent of votes, as the Supreme Court has annulled the result of that election.

The president said this in his address to the nation on the occasion of Eid al-Adha.

“There are some people who believe that, since it was decided that I gained only five percent of votes in the election, I have no right to speak for the Maldivian people. I don’t accept that, because it is the result of a void election, and because given my post, every action I take affects a large group Maldivian people,” he said.

The president said that he decided to not support any particular candidate in the re-run of the first round of the election, because he supports all candidates.

In his speech today, President Waheed made two requests. He urged to hold the election peacefully and fairly, and to fully cooperate with all efforts related to the election; and to ensure that the elected candidate is sworn in on 11 November.

He said that it is the national duty of the candidate who wins the election to save the country from its current state of turmoil, and to save the people from the hatred and strife that exist in the society.

He said that he has led the country to its current state peacefully and without bloodshed, after this responsibility was handed over to him by the people five years ago.

Similarly, he asked if the person who gets elected as president would be someone who would attempt to solve the current problems peacefully, or someone who would create more unrest and challenges for the country.

He also asked if the person who gets elected as president would be someone who would act in retribution against everyone who does not agree with him, or someone who is kind and forgives others.

The president urged the people to think about these questions, and reminded that the country is gripped by a polarised political situation, where it has become common to wreak vengeance on one another.

He said that the public has been misled to the extent that they are not able to differentiate between truths and lies, and that inciting hatred and strife to gain political advantages are rife in the country.

The president said that the country is faced with a situation that could pose political and economic threats for the people, and that the interests of the people and the nation have been somewhat overlooked in the struggles to gain power.