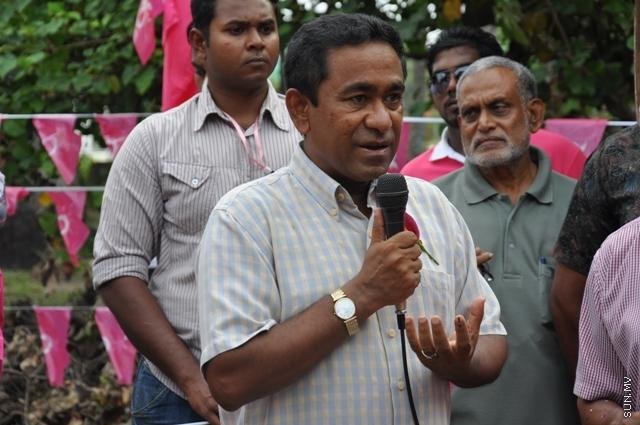 Presidential candidate of the Progressive Party of Maldives (PPM) Abdulla Yameen has said that if elected, a PPM government would transform the Vilimale’ Health Centre into a hospital.

Yameen made this remark while talking to reporters after concluding his door-to-door campaign round yesterday.

“When we visited Vilingili, people shared their concerns regarding the difficulties they face in terms of healthcare. The population of Vilingili is over 15,000. We believe that the health centre here should be replaced by a hospital. So I assured the people of Vilingili that our government, soon after we are elected, will change the current health centre into a hospital,” he said.

Yameen said that they visited all houses in Vilingili, and that they received a warm welcome from the people of Vilingili.

Criticising presidential candidate of Maldivian Democratic Party (MDP), former president Mohamed Nasheed, Yameen said that while MDP advocates freedom of speech, they arrested the politicians who exercised this right during their government.

Referring to the complaints regarding the results of the first round of the presidential election, Yameen said that PPM does not want to file a case to court, because PPM does not believe that enough problems exist to take the matter to court.

He said that this does not mean that the party accepts the results of the first round of the presidential election.

“We are aware that votes were cast by duplicating identity cards,” he said.

He said that the Elections Commission had been requested, if the ballot papers are printed in the Maldives, to facilitate the opportunity for representatives of each candidate to observe the process of the papers being printed and transported to the warehouse.

“That way, we would have the confidence that there is no fraud regarding the ballot papers,” he said.

Yameen said that PPM has also requested the Elections Commission to allow representatives of the candidates to sign the voters’ lists kept at the voting stations, to ensure that the lists are not altered in any way after voting is completed.