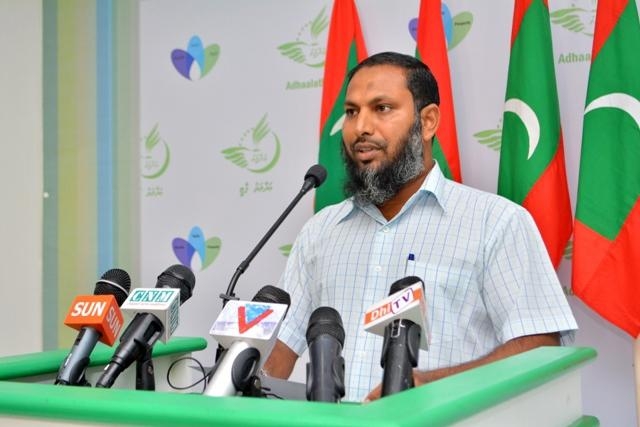 Adhaalath Party has tonight decided to join Jumhoory Party in coalition to compete for the upcoming presidential elections.

In a statement released at 12 a.m. tonight, Adhaalath Party announced that their council had decided to form a coalition with Jumhoory Party (JP), stating that JP alone is conducting a “steady” campaign.

“Adhaalath Party has decided to join Jumhoory Party in coalition for the 2013 presidential election because the party believes, after reflecting on the candidates that have come forward to undertake this important and heavy task, that Jumhoory Party is making proper preparations and is conducting a steady campaign to win this election, that if the election is won, Jumhoory Party’s presidential candidate Honorable Gasim Ibrahim is the person most capable of defending the country from foreign influences, to safeguard the country’s highest of priorities, and that he is capable of working in an independent manner,” the statement by Adhaalath Party’s President read.

Sheikh Imran did not state the number in attendance at the party’s council meeting tonight or the count of the vote by which the decision was made. The press did not get the opportunity to field questions.

Adhaalath Party first joined President Waheed’s "Forward with the Nation coalition", but recently dropped out after citing ‘suspicious activities’ within the coalition.

Adhaalath Party formed a similar coalition with JP in the run-up to the 2008 presidential elections. The party’s spokesperson at the time and the present Minister of Islamic Affairs Sheikh Mohamed Shaheem Ali Saeed had commended Gasim Ibrahim’s ability by stating that “a person capable of controlling four wives is more than capable of controlling the country.”

Will subsidize all government services for the elderly: President Waheed