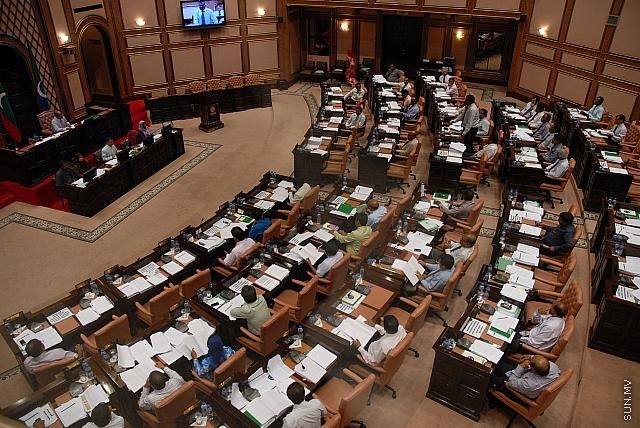 Parliament has rejected the recently proposed bill seeking to implement the death penalty by hanging.

The bill was rejected at today’s parliament sitting with a majority vote of 26 against. The bill received 18 votes in favour.

Titled “Bill on implementing death penalty”, presented to the parliament by Vilufushi MP Riyaz Rasheed, seeked to implement the death penalty by hanging if the Supreme Court upholds the sentence passed by the lower courts.

A similar bill which proposes to implement the death penalty by lethal injection, has been assembled by the government is currently open for comments..

Presenting the bill to parliament earlier this month, MP Riyaz Rasheed said that the purpose of the bill was to introduce a means to implement the death penalty in the Maldives and consequently address the issue of increasing number of murders in the country.

The bill received harsh criticism from MPs from the Maldivian Democratic Party (MDP). They argued that the penalty for willful murder of a human being is clearly stated in Islam and that the death penalty should not be defined by legislation.

Speaking during the debate, Manadhoo MP Mohamed Thoriq said that the bill was proposed “just to show off” and that the death penalty should only be implemented through laws stated in Islam.

Dhivehi Rayyithunge Party (DRP) parliamentary group member and Nolhivaram MP Mohamed Nasheed said that although he agrees that proper legislation is needed to implement the laws in Islam, he “will not vote to kill someone” at a time when “suspicion” exists within the judiciary. He said that he will vote in favour for such a bill only when he can bestow complete faith in the judiciary.

“In reality, there are a lot of things I want to consider before I cast a vote that will allow a Maldivian citizen to be executed. Islam has determined penalties for certain reasons, to protect certain things. To protect property, life, religion, lineage and dignity. I don’t want a person to die because of a vote that I cast in favour of a law that does not protect these things,” MP Mohamed Nasheed said.

It required the convict to be hanged in the presence certain officials, including a medical doctor designated by the Department of Penitentiary and Rehabilitation (DPRS), a lawyer from the Prosecutor General’s Office (PG), a member from the Human Rights Commission of the Maldives (HRCM) and at least one of the convict’s hires.

MTCC commissioned to carry out harbour development projects for 22 islands