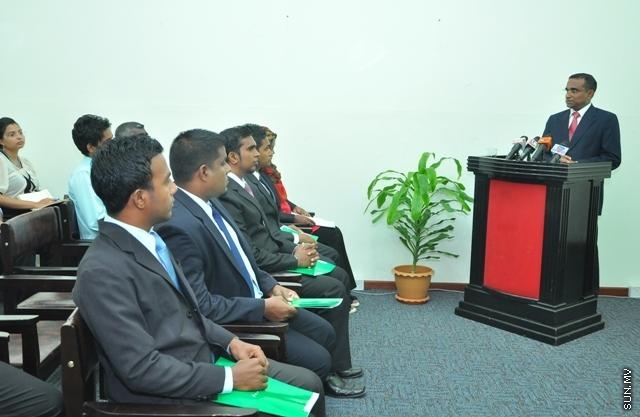 The Chief Justice’s statements were made at a function held last evening to appoint five magistrate judges to courts.

Faiz said that the Supeme Court bench will endure as long as democracy prevails in the Maldives, and that changes cannot be brought to the bench.

He said that it can only see changes if one of the seats become vacant and thus, to appoint a replacement.

“God willing, as long as there is a democratic system in the Maldives, Supreme Court bench will remain. The bench is not something that can be changed. It can only be done if one of the positions become vacant, a person can be appointed to that position. The bench cannot be changed,” Faiz said.

Speaking at the function, Chief Justice bid the newly appointed judges to not be afraid of what some powerful institutions might say, but rather refrain from getting entangled in the sentiments and to focus on working within the boundaries of the law.

The Chief Justice’s statements come at a time when the Maldivian Democratic Party (MDP) has declared that they will propose to the Parliament to abolish the Supreme Court.

The party held a march last Friday calling for the abolition of the Supreme Court.

Sentiments against the Supreme Court within the MDP got flared up recently after the court ruled to invalidate the Parliament's decision to establish secret voting for votes of no confidence against the President and his cabinet. The recent Supreme Court decision declaring that the Parliament’s decision to remove the President of Civil Service Commission Mohamed Fahmy Hassan from his office was unconstitutional had also added cause to the negative sentiments from MDP.

The Chief Justice said that every person has the right to seek the courts the they believe that their rights have been hindered and that they had been treated unjustly, and said that a decision made by the last authority of the judiciary is the final decision and that it cannot be changed.

He continued to say that every case filed in the courts will be duly attended and that the process will not stop, and that matter can be solved through negotiations and dialogue before they reach the courts, but once it reaches the courts, the matter will undergo the designated proceedings.