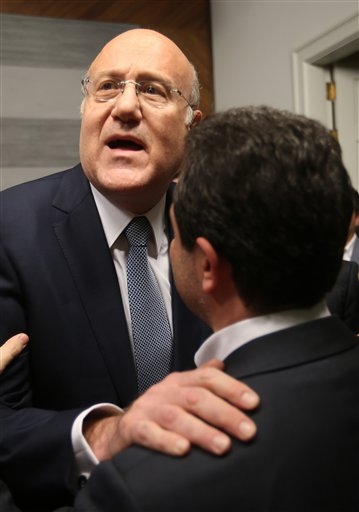 BEIRUT (AP) — Lebanon's prime minister resigned Friday due to government infighting that threatens to leave a void in the state's highest ranks at a time of rising tensions and sporadic violence enflamed by the civil war in neighboring Syria.

Najib Mikati stepped down to protest the parliament's inability to agree on a law to govern elections set for later this year, as well as for the Cabinet's refusal to extend the tenure of the country's police chief, who is about to retire.

Underpinning the political crisis are Lebanon's hugely sectarian politics and the fact that the country's two largest political blocs support opposite sides in Syria's civil war. Lebanon and Syria share a complex network of political and sectarian ties, and many fear that violence in Syria will spread to Lebanon.

In a speech aired live Friday on Lebanese TV, Mikati said he hoped his departure would force other politicians to find solutions.

"Today I announce the government's resignation, hoping that God willing it will provide an impetus for the primary political blocs in Lebanon to assume their responsibilities," he said.

"There is no way to be loyal to Lebanon and protect it other than through dialogue that opens the way to the formation of a salvation government that represents all Lebanese political powers and takes responsibility for saving the nation," he said.

There were signs of rising tensions before Mikati's speech.

Gunmen who support and oppose Syrian President Bashar Assad clashed Friday in the northern Lebanese city of Tripoli, leaving six people dead and more than 20 wounded, according to state-run National News Agency. Clashes between the Sunni neighborhood of Bab Tabbaneh, which supports Syria's rebels, and the adjacent Alawite neighborhood of Jabal Mohsen, which supports Assad, have broken out repeatedly in recent months.

Also in Tripoli, the Lebanese army said a soldier was killed and several others wounded during an army raid to capture several gunmen.

Also, the Hezbollah-dominated Cabinet has refused to extend the tenure of Maj. Gen. Ashraf Rifi, Lebanon's police chief, who is considered a foe by the Islamic militant group.

In his speech, Mikati said Rifi's departure would send the police department into "a vacuum."

Lebanese President Michel Suleiman must accept Mikati's resignation for it to be official, a step that is all but a formality.

This will open the way for a new round of political jockeying as the parliamentary blocs try to build coalitions to choose a new prime minister. Top posts will remain vacant until a new Cabinet is in place.

"Our basic view of this is that we believe the Lebanese people deserve a government that reflects their aspirations and one that will strengthen Lebanon's stability, its sovereignty and its independence," she told reporters. "And we have grave concerns about the role that Hezbollah plays."

Mikati has been prime minister since June 2011, heading a government dominated by Hezbollah and its allies. Their main rivals are a Western-backed coalition headed by former Prime Minister Saad al-Hariri, son of Rafik Hariri, who was also Prime Minister and killed in a truck bombing in 2005.

A Harvard-educated billionaire, Mikati was chosen to lead the government after Hezbollah forced the collapse of Lebanon's previous, pro-Western government over fears a U.N.-backed tribunal investigating the killing of the elder Hariri would indict Hezbollah members.

But Mikati's relations with Hezbollah have never been smooth. He has rejected the notion that he serves Hezbollah or that his government will act as an Iranian proxy. Hezbollah accuses him of loyalty to the rival camp.

Mikati's resignation may be an attempt to boost his credentials among his fellow Sunni Muslims ahead of the upcoming election and amid the violence in Tripoli, his hometown.