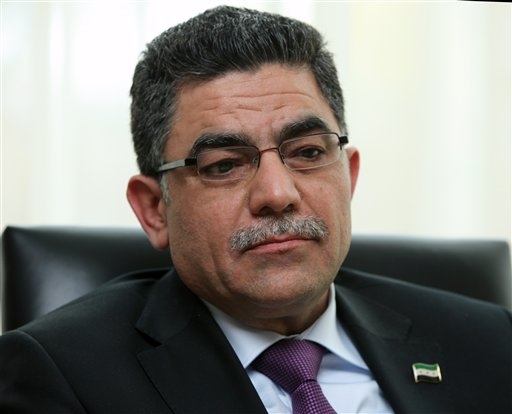 BEIRUT (AP) — Syrian President Bashar Assad vowed Friday to avenge the death of a senior pro-government cleric who was killed along with dozens of people in a suicide bombing at a Damascus mosque, saying he would "purge our country" of the militants behind the attack in the heart of the capital.

Both Assad and the rebels seeking to topple him blamed each other for Thursday's bombing at the mosque. At least 49 people were killed, including the 84-year-old preacher and his grandson, the government said, in one of the most brazen assassinations of the Syrian civil war.

Although the cleric was despised by the rebels for his unwavering support of the regime, opposition leaders condemned his killing.

In a rare statement on Syrian state media, Assad framed the attack as part of a terrorist conspiracy against his government and praised the slain preacher, Sheik Mohammad Said Ramadan al-Buti.

"Your works full of truthfulness and belief were the best expression of the essence and light of Islam in confronting the powers of darkness and extremist thought that considers others infidels," Assad was quoted as saying by the SANA news agency.

He blamed "terrorists" — his standard shorthand for the opposition — for the attack, and vowed to "purge our country of them."

"And this is a promise from the Syrian people, and I am one of them, that your blood, that of your grandson and the blood of all today's martyrs and all martyrs of the homeland will not go in vain," the statement from Assad said.

Al-Buti, Syria's best-known cleric and the most prominent religious figure killed so far in the conflict, had supported the regime since the early days of Assad's father and predecessor, the late President Hafez Assad, providing legitimacy to their rule. Sunnis are the majority sect in Syria while Assad is from the minority Alawite sect — an offshoot of Shiite Islam.

The opposition Britain-based Syrian Observatory for Human Right put the death toll in the bombing at 52. No group claimed responsibility for the blast.

The exile opposition Syrian National Coalition blamed Assad's government for the attack, arguing that the bomber could have only reached the heavily guarded mosque with regime support.

"He who does not hesitate to bomb mosques, universities and bakeries and target residential areas with Scud missiles cannot be expected to refrain from carrying out terrorist explosions that kill innocent Syrian civilians," the statement said.

Coalition leader Mouaz al-Khatib, who rose to prominence preaching in the same historic mosque as al-Buti, acknowledged their political differences.

"We almost never agreed with his political opinions and we see his position toward rulers as not theologically sound, but we view his killing as a crime that opens the doors of evil that only God knows," al-Khatib said on his Facebook page.

He suggested the regime had a hand in the bombing, saying he thought al-Buti was changing his views on the civil war.

"We think the regime liquidated him, fearing that a courageous position from him would flip the entire balance," he said.

Al-Buti's killing exposed the weak links between the rebel fighters on the ground and their purported political leadership, and it could boost the government's argument that Islamic extremists dominate the uprising.

In Amman, Jordan, President Barack Obama said Assad is sure to go but added that he was worried about Syria becoming a haven for extremists afterward.

Standing beside King Abdullah II of Jordan, Obama said the international community must work together to ensure there is a credible opposition ready to take over.

"Something has been broken in Syria, and it's not going to be put back together perfectly immediately — even after Assad leaves," Obama said. "But we can begin the process of moving it in a better direction, and having a cohesive opposition is critical to that."

Al-Buti's killing came near the start of the third year of the Syrian crisis, with rebel and regime forces largely stalemated and an estimated 70,000 people dead. The opposition is trying to get organized enough to provide basic services to people in rebel-held areas and better coordinate the hundreds of independent groups fighting across Syria.

Earlier this week, the coalition elected an interim prime minister. Coalition members hope U.S.-educated Ghassan Hitto will encourage world powers to back the rebels with badly needed funding and weapons.

But so far, the coalition has failed to project its authority inside of Syria or exercise any control over the groups fighting Assad on the ground, many of them fueled by extremist ideologies and calling for an Islamic state.

Most expect it was one of those groups that killed al-Buti, reflecting how little the opposition's exile leadership has over groups on the ground.

Hilal Khashan, political scientist at the American University in Beirut, dismissed opposition claims that the regime killed al-Buti and said it was unlikely that the killing would cause many Syrians to changes sides in the war.

Although a Sunni Muslim like most of the rebels, al-Buti's continued defense of Assad pushed many in his sect away long ago.

"Sunnis who are against Assad have already made their choice and gone to the opposition, and I don't think that those in the opposition who are condemning it are really against it," he said.

Instead, the attack — the conflict's first suicide bombing inside a mosque — could mark the start of a dark new stage in the civil war.

"Attacking a mosque and killing worshippers is not a blow to the government or a victory for the opposition," Khashan said. "I see it as a small example of what will happen in post-Assad Syria."

Al-Buti's funeral is scheduled for Saturday in Damascus following noon prayers. Assad declared it a day of mourning.

The panel, which began its work in August 2011, said earlier this month that it was collecting evidence on 20 alleged massacres in Syria, a reflection of the civil war's growing brutality.

In neighboring Lebanon, pro- and anti-Assad gunmen fought in the northern port city of Tripoli, leaving six people dead and more than 20 wounded, according to state-run National News Agency. Clashes between the Sunni neighborhood of Bab Tabbaneh, which supports Syria's rebels, and the adjacent Alawite neighborhood of Jabal Mohsen, which supports Assad, have broken out repeatedly in recent months.

Also in Tripoli, the Lebanese army said a soldier was killed and several others wounded in an army raid to capture several gunmen.

Syria's crisis began with political protests in March 2011 and has since become a civil war.

Many fear that violence in Syria could unsettle Lebanon since the countries share a complex web of political and sectarian ties and rivalries that are easily enflamed.

Obama warns of 'enclave for extremism' in Syria