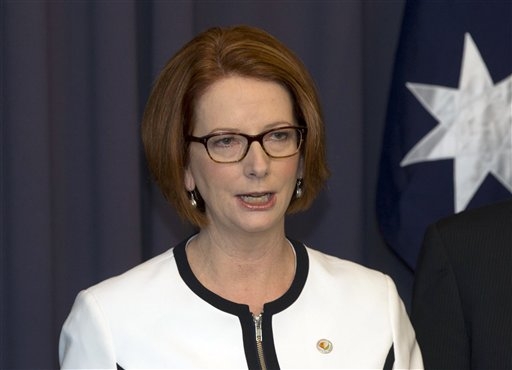 "This is the honorable thing to do," Chris Bowen told reporters after Gillard accepted his resignation as minister of tertiary education, skills, science and research.

Gillard already dumped the senior minister who forced her to call the leadership ballot before her expected challenger refuse to run. A junior minister and three officials within the center-left Labor Party have departed as well.

Australian prime ministers are chosen by lawmakers within the ruling party, and a leadership change is often considered as a solution to abysmal opinion polling.

Former Prime Minister Kevin Rudd stunned many with the 11th-hour announcement that he wouldn't challenge her. His office said in a statement Friday that "there are no circumstances under which he will return to the Labor Party leadership in the future."

He explained that he was keeping a vow made when he lost a leadership ballot to Gillard a year ago that he would not challenge again.

Gillard said Friday she was surprised that Rudd hadn't taken a shot at the top job. Part of Rudd's appeal is that opinions polls show he is far more popular with voters than Gillard.

Senior minister Simon Crean, who brought the leadership crisis to a head by calling on his government colleagues to force a ballot, was sacked, and junior minister Richard Marles, a rising star who publically backed Rudd, resigned late Thursday.

Another three Rudd supporters have resigned from senior positions within the party organization: Joel Fitzgibbon, Ed Husic and Janelle Saffin.

None has quit politics so the government's slender parliamentary majority with the support of independents remains unchanged.

The government ranks are split over whether by avoiding a showdown with Gillard, Rudd had let down his supporters who have worked behind the scenes to undermine Gillard's leadership in the face of the government's likely defeat at national elections on Sept. 14.

But Bowen said Rudd had done "the decent thing" by not forcing a divisive vote.

"He took the view that a divisive ballot which was close would not resolve the issue of the leadership and he didn't want to put the Labor Party through that," Bowen added.