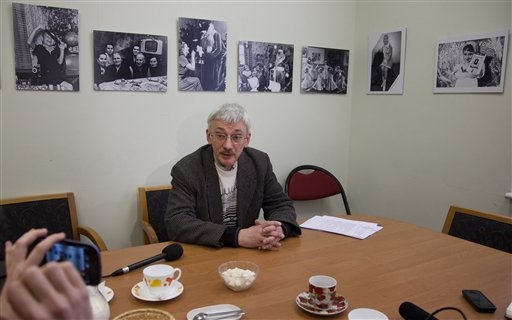 MOSCOW (AP) — Russian prosecutors are conducting wide-ranging checks of hundreds of nongovernmental organizations, as part of what rights activists say are President Vladimir Putin's efforts to stifle dissent and shield the nation from perceived Western influence.

The inspections and searches have targeted up to 2,000 organizations since last month, said Pavel Chikov, a member of the presidential human rights council. The action followed Putin's speech in February before senior officers of the FSB, the main KGB successor agency, in which he urged them to focus attention on groups that receive foreign funding used to "put pressure on Russia."

A team of prosecutors, Justice Ministry officials and tax police spent most of the day Thursday searching the Moscow offices of Memorial, one of Russia's oldest and most respected human rights groups. They were accompanied by journalists from the state-controlled NTV station, which has been used by the Kremlin for hatchet jobs against its political foes.

"This is the result of a directive from the very top, from Mr. Putin personally, to go and deal with all the NGOs that are too independent," Memorial director Oleg Orlov said.

Officials wouldn't comment on the purpose of the visit, but Arseniy Roginsky of Memorial said it could be linked to a recently passed law requiring all nongovernmental organizations with foreign funding that engage in political activities to register as "foreign agents," a loaded term conjuring past Soviet spy mania.

Memorial and other leading Russian NGOs have said they would ignore the law, which they denounced as an instrument for stifling critics with a mixture of repression, fines and inspections.

Chikov said the scale of the government campaign is unprecedented.

"It goes full circle across the whole spectrum," Chikov told The Associated Press. "They're trying to find as many violations as possible."

Putin has long been suspicious of NGOs, especially those with American funding, which he has accused of being fronts for the U.S. government to meddle in Russia's political affairs. After his return to the presidency last May, lawmakers passed the NGO bill along with other repressive laws, including one that broadened the definition of treason to potentially encompass any interaction with foreigners.

The U.S. Embassy in Moscow posted a message on Twitter late Thursday saying: "We are following reports of the unprecedented inspections of NGOs taking place across Russia with great concern." In a second tweet, the embassy said it has asked the Russian government "for clarity as to the reasons behind the actions."

Putin's rhetoric has been part of a broader attempt to draw on nationalist sentiment, which he sees as key to his electoral support, by painting Russia as a target of hostile forces, particularly the United States.

The Kremlin seems particularly rattled by political NGOs, seeing them as an engine behind a series of unprecedented street protests against Putin's rule during the run-up to his re-election. Golos, the nation's main independent vote-monitoring group, which has played a leading role in documenting reports of violations in parliamentary and presidential elections, has had to strip its operations to a minimum for lack of funding. Its regional branch in Samara, a city on the Volga River, has been searched by three separate agencies in the past three months.

Chikov said the prosecutor general's office ordered every region in Russia last month to check all religious, political and social NGOs for violations of Russia's vaguely worded "extremism" law. The law is ostensibly intended to target violent neo-Nazi groups, but has been used against things as wide-ranging as Scientologists and the TV show "South Park," as well as to stamp out dissent.

Memorial is one of about 60 Russian organizations that had depended on funding from the U.S. Agency for International Development. This funding dried up after Russia kicked USAID out of the country last year, but the U.S. made clear that it was not abandoning its support for these organizations.

News website Gazeta.ru cited a prosecutor in St. Petersburg as saying all 5,000 NGOs in the city would be searched.

Members of the rights council sent a letter Thursday to Russia's prosecutor general, saying it has been flooded in recent days with complaints from NGOs and asking for an explanation.

The human rights council said the searches have been carried out by prosecutors, police and the FSB, but also by tax officials, fire inspectors and officials from the labor and health departments, who have nothing to do with enforcing the extremism law.

"Really fighting extremism and trying to scare law-abiding NGOs staff is not the same thing," the council letter said.