Roma, Atalanta and Lazio win to close in on top 4 in Serie A 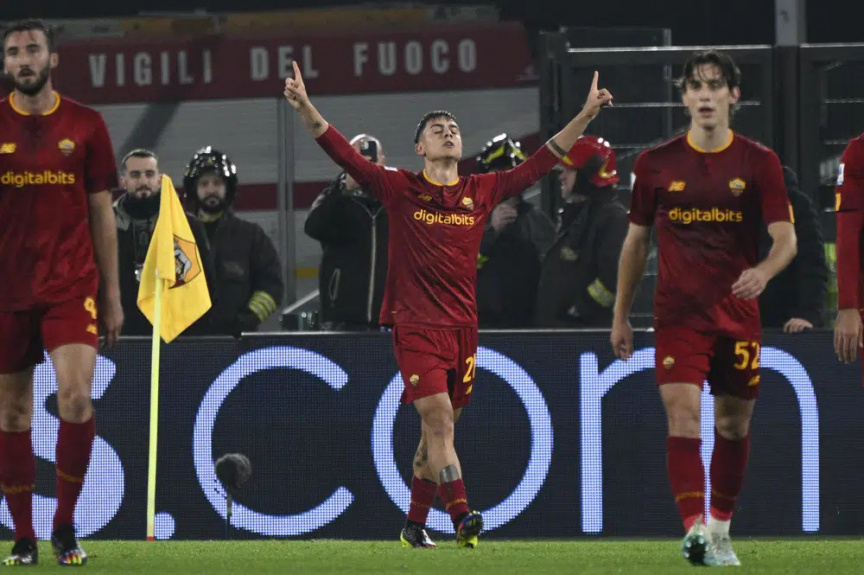 Roma's Paulo Dybala celebrates after scoring a goal during the Italian Serie A soccer match between AS Roma and Fiorentina, at the Olympic Stadium, in Rome, Sunday, Jan. 15, 2023. (Fabrizio Corradetti/LaPresse via AP)

MILAN (AP) — The race for the Champions League qualifying spots is getting tighter in Serie A.

Roma, Atalanta and Lazio all won on Sunday to move within three points of Inter Milan and Juventus, which occupy the final qualifying positions for European soccer’s top club competition.

Second-place AC Milan is only another point further ahead, and nine points behind runaway Serie A leader Napoli.

Roma beat 10-man Fiorentina 2-0, Lazio won at Sassuolo by the same score for its first victory of the new year, and Atalanta destroyed Salernitana 8-2.

Paulo Dybala scored both goals in Rome — both on assists from Tammy Abraham. Fiorentina had to play most of the match with 10 men after Dodô was sent off in the 24th minute following a second yellow card.

Roma eventually made the numerical superiority count five minutes before the break when Abraham chested down a ball over the top for Dybala’s impressive volley.

And the two combined again eight minutes from time when Abraham raced into the right side of the area before rolling across for Dybala to slot home.

Jérémie Boga’s stunning goal set Atalanta on the way to a lopsided victory.

Boga cut inside from the left and beat three players before managing to get a shot away that was deflected in off Salernitana defender Domagoj Bradarić to give the hosts a fifth-minute lead.

Boulaye Dia leveled just five minutes later but the floodgates then opened and Atalanta was 5-1 up by halftime with Ademola Lookman’s penalty and goals from teenagers Giorgio Scalvini and Rasmus Højlund. Teun Koopmeiners also scored before the break, tucking away the rebound after his initial penalty had been saved by Guillermo Ochoa.

Both penalties were awarded for fouls by Federico Fazio on Højlund.

Lookman doubled his tally early in the second half, while Éderson and Nadir Zortea were also on the scoresheet against their former team. Hans Nicolussi Caviglia netted for Salernitana.

Lazio had started the year poorly, losing at Lecce and then conceding two goals late on to draw 2-2 against Empoli last weekend.

It lost key forward and captain Ciro Immobile in the 15th minute at Sassuolo when he limped off with a muscular problem.

Lazio struggled to carve out scoring chances but was handed the opportunity to break the deadlock right at the end of the first half when Sassuolo defender Jeremy Toljan blocked Sergej Milinković-Savić’s header with an outstretched arm.

Lazio had chances to double its lead but didn’t manage to until stoppage time when Milinković-Savić nodded on a long goal kick and Anderson caught Sassuolo defender Ruan Tressoldi napping to rush into the area and round goalkeeper Gianluca Pegolo before depositing into an empty net.

It was Sassuolo’s sixth defeat in its past seven matches and left it seven points above the relegation zone.

M’Bala Nzola’s first-half penalty was enough to give Spezia a 1-0 win at Torino to go nine points clear of the drop zone.

Bologna fought back to win 2-1 at Udinese.