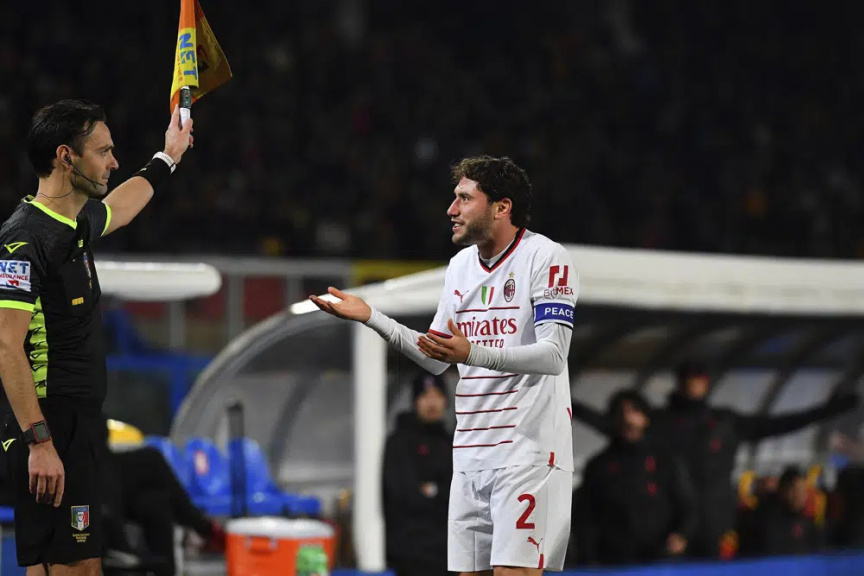 Milan's Davide Calabria is shown a yellow card, during the Serie A soccer match between US Lecce and AC Milan, in Lecce, Italy, Saturday, Jan. 14, 2023. (Giovanni Evangelista /LaPresse via AP)

MILAN (AP) — AC Milan’s dismal start to the year continued when it had to fight back from two goals down to draw at Lecce 2-2, losing more ground in the Serie A title race on Saturday.

An early Théo Hernandez own goal and a header from Federico Baschirotto gave Lecce a solid halftime lead. But Milan, which fumbled a two-goal lead last week, managed to rescue a point with goals from Rafael Leão and captain Davide Calabria.

Milan moved back into second spot but the defending champion was nevertheless nine points behind Napoli, which crushed Juventus 5-1 on Friday.

“Of course it’s not nice, you want to go away with the three points,” Milan defender Sergiño Dest said. “The way we started was not sharp enough. They wanted it more than us at the beginning of the game.

“In the second half it went better but normally, as AC Milan, you have to take the three points here.”

Meanwhile, Inter Milan was level with Juventus, a point behind AC Milan, after a 1-0 win over relegation-threatened Hellas Verona.

After opening 2023 beating Salernitana, AC Milan has gone on a slide. The Rossoneri were held by Roma to 2-2 last Sunday after squandering a two-goal lead and was eliminated from the Italian Cup by 10-man Torino on Wednesday.

Matters didn’t improve at Lecce as Milan found itself behind almost immediately. Hernandez tried to intercept a cross from Federico Di Francesco but ended up bundling the ball into his own net in the third minute.

Lecce doubled its tally in the 23rd when a corner was taken short and a cross whipped in by Morten Hjulmand for Baschirotto to head past Ciprian Tătărușanu.

Milan offered little in the first half and Lecce squandered more chances.

But the Rossoneri came out after the break in different fashion and pulled one back in the 58th. Olivier Giroud’s effort was parried and the ball went to Leão, who everyone expected to cross. Instead, he surprised Lecce goalkeeper Wladimiro Falcone by firing in from a tight angle.

And the comeback was complete 12 minutes later when Giroud headed Dest’s cross back across goal for Calabria to head in the equalizer.

The Argentina international got Inter off to the perfect start in the third minute. Henrikh Mkhitaryan made a good run into the area and a Roberto Gagliardini shot was charged down but the ball eventually came to Martínez, who fired it into the bottom left corner.

Martínez’s ninth league goal of the season followed another score midweek in an Italian Cup victory over Parma.

Martínez also had a goal disallowed in the 63rd for a foul by him on Verona defender Paweł Dawidowicz in the buildup.

Cremonese’s Serie A future looks to be ever more bleak after the bottom club lost at home to Monza 3-2.

Cremonese remained the only team without a win, and eight points from safety.

Man U flying high after City win and Liverpool loss