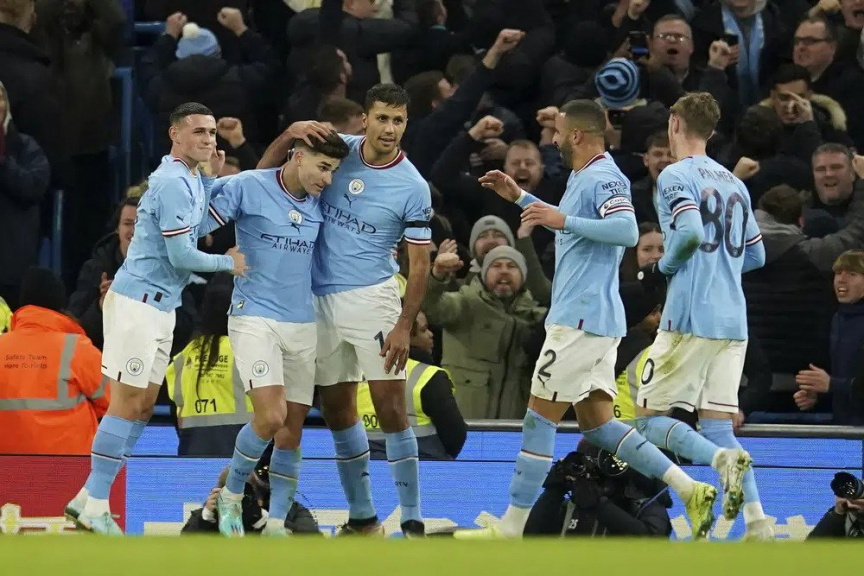 Different competition, same outcome. Manchester City beat Chelsea for the second time in less than three days, on this occasion in the FA Cup.

And this time it was a 4-0 thrashing, without even needing Erling Haaland and Kevin De Bruyne.

City’s top two players were given a rest after the 1-0 win over Chelsea in the Premier League on Thursday yet they weren’t especially missed, with Riyad Mahrez, Julián Álvarez and Phil Foden scoring first-half goals and Mahrez adding another late on in a third-round cruise.

Next up for City in world soccer’s oldest knockout competition is a rival that is likely to be its biggest threat to the defense of the Premier League title. Arsenal, which leads second-place City by five points in the league, will be heading to Etihad Stadium in the fourth round if it beats third-tier Oxford United on Monday.

Mahrez scored the only goal in the teams’ league match at Stamford Bridge on Thursday. While that was a tap-in, this one in the cup was a curling shot from a direct free kick that sailed into the top corner in the 23rd minute.

Álvarez, making his first start for City since winning the World Cup with Argentina, converted a 30th-minute penalty after Chelsea forward Kai Havertz bizarrely chose to lead with his left arm as he attempted a headed clearance at a corner and succeeded only in punching the ball away to concede a spot kick.

Foden capped a three-goal flurry in a 15-minute span at the Etihad when he guided home a close-range finish at the end of a flowing team move involving Rodri, Mahrez and then Kyle Walker, who sprinted upfield to deliver a cross for Foden.

Mahrez scored his second from the penalty spot in the 85th after Foden was bundled over by Kalidou Koulibaly.

The problems mount for Chelsea manager Graham Potter, whose injury-hit squad is in 10th place in the Premier League and is already out of both cups — having already lost to City in the League Cup in November.

Chelsea fans sang the name of the team’s former manager, Thomas Tuchel, during the game and many left the stadium early. It was the first time since 1998 that Chelsea exited the FA Cup in the third round.

“You can make excuses or look for reasons, and you can say it isn’t good enough,” Potter said. “Both of those answers are correct. We have to keep improving and stick together. Because clearly we are suffering as a football club.”

City manager Pep Guardiola urged Chelsea to stick with Potter, who has been in charge since September.

“I would say give him time,” Guardiola said. “At Barcelona, I had (Lionel) Messi there. That’s why I didn’t need two seasons (to prove himself) and one was enough.”

City is still in the hunt for trophies in all four competitions and plays Southampton away in the League Cup quarterfinals on Wednesday.

Aston Villa conceded twice from the 88th minute and was beaten 2-1 at home by fourth-tier Stevenage in probably the biggest shock of the third round.

Ahead thanks to Morgan Sanson’s 33rd-minute goal, Villa was reduced to 10 men when Leander Dendoncker was red-carded in the 85th for a professional foul that gave Stevenage a penalty.

That was converted and the visitors, who are in second place in League Two, grabbed an unlikely winner in the 90th.

Villa has been eliminated at the third-round stage — when teams from the top two leagues enter the competition — in each of the last seven seasons. It has lost eight straight FA Cup matches since 2016.

Jesse Marsch had quite the ride in his first match in the FA Cup.

The American coach saw his Leeds team rally from 2-0 down against second-tier Cardiff to draw 2-2 thanks to an equalizer in the third minute of stoppage time by substitute Sonny Perkins.

Rodrigo began Leeds’ recovery by pulling a goal back in the 65th before the Spain striker had a penalty saved in the 81st after Cardiff defender Joel Bagan stopped a goal-bound shot from Junior Firpo with his outstretched hand and was shown the red card.

The 18-year-old Perkins came to Rodrigo’s rescue with a close-range goal to send the teams to a replay.

Man City knocks out Arsenal 1-0 in the FA Cup

Bale retires at 33 with 5 CL titles