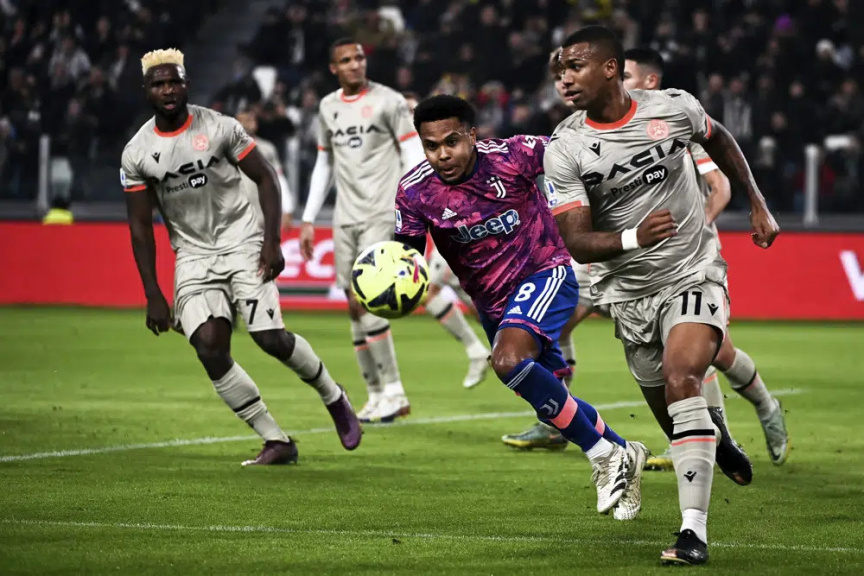 Udinese's Walace, right, fights for the ball with Juventus' Weston McKennie during the Italian Serie A soccer match between Juventus and Udinese, at the Juventus stadium in Turin, Italy, Saturday Jan. 7, 2023 (Marco Alpozzi/LaPresse via AP)

MILAN (AP) — Juventus stretched its winning streak to eight matches when it scraped past Udinese 1-0 in Serie A on Saturday.

Danilo scored four minutes from time thanks to a fabulous assist from Federico Chiesa.

Massimiliano Allegri’s team has also not conceded a goal in its past eight matches despite being rocked by a bookkeeping scandal during the break when the club’s board of directors resigned en masse and the Turin prosecutor’s office requested indictments.

Juventus moved into second place in Serie A, a point above defending champion AC Milan, which hosts Roma on Sunday.

Inter Milan was three points behind Juventus after being held to 2-2 at Silvio Berlusconi’s Monza.

The Bianconeri were four points behind Serie A leader Napoli, which visits Sampdoria on Sunday. The two meet in Naples on Friday.

“There’s a good game waiting for us but we have to take it one step at a time,” Allegri said. “Today, what mattered was to win, to consolidate our position in the top four.

“Napoli is going at an infernal pace. We’ll keep a low profile. Seasons are decided in the last two months.”

There was a moving tribute to Gianluca Vialli before kickoff in Turin as well as a minute’s silence, which preceded all matches in Serie A this weekend.

Vialli, who died on Friday, helped Juventus to a Serie A title and the European Cup during a four-year stint.

“This is a win for him,” Chiesa said.

The Juventus players also wore black armbands, while there were many banners in the stands dedicated to Vialli as well as chants from the supporters.

But those chants turned to jeers at halftime after a less than impressive performance.

Udinese goalkeeper Marco Silvestri did, however, have to pull off remarkable stops, notably to keep out Daniele Rugani’s header.

Juventus eventually broke the deadlock with impressive play from Chiesa, who chested down a ball over the top before volleying across the face of goal for Danilo to tap in from point-blank range at the back post.

Inter was full of confidence after beating Serie A leader Napoli three days ago, when the league resumed after a 7 ½-week break.

And it took the lead in the 10th minute when Alessandro Bastoni whipped in a cross from the left for Matteo Darmian to bundle in at the far post.

But the Nerazzurri’s advantage lasted less than a minute before Patrick Ciurria curled into the bottom left corner for his first Serie A goal.

Inter restored its lead in the 22nd following a horrendous defensive mistake. There seemed to be little danger when Monza goalkeeper Michele Di Gregorio passed the ball to teammate Pablo Marí in their own penalty area but Lautaro Martínez nipped in to steal the ball off the defender and slot it into the far bottom corner.

Martínez also hit the post late on and was to rue that missed opportunity as Luca Caldirola headed in the equalizer in stoppage time.

Nicolás González marked his comeback from a lengthy injury layoff by scoring a stoppage-time penalty to help Fiorentina beat Sassuolo 2-1.