Mariya: MDP’s philosophy and spirit does not revolve around a specific person 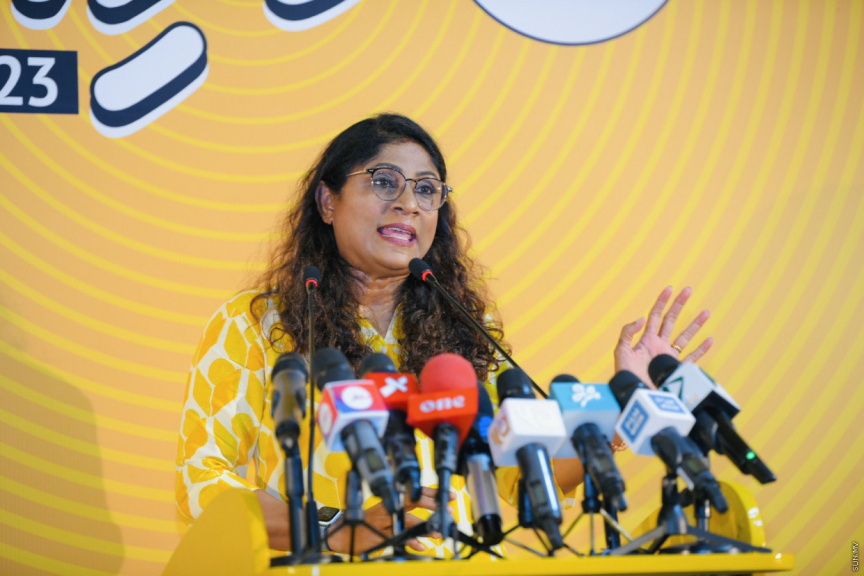 Speaking during Wednesday night’s campaign event for President Ibrahim Mohamed Solih – who is contesting Nasheed for the party’s presidential ticket, Mariya said President Solih’s administration had brought an end to the previous administration’s tyranny and established democracy in Maldives.

“Some of our party members think to themselves, there’s democracy now in Maldives, that its time for an internal fight, that others should not be allowed to remain in the party, that only a specific group should rule, that within their voice lies our spirit,” she said.

Mariya alleged a group of members within the party are attempting to create internal conflict following the establishment of a ‘stable’ administration.

Mariya said that MDP was founded to bring an end to philosophy that revolves around a specific person, and ascertain fundamental rights to the people.

“If we do this in this manner in our internal elections, we may lose office,” she said.

Mariya said the entire party must focus on a may to retain the MDP administration, warning that Maldives would backtrack if MDP were to lose office.

“Isn’t it only now that the people are being provided with clean water and sanitation?” she said.

MARIYA TO NASHEED: WHY ARE YOU CONTESTING IF YOU LACK SUPPORT?

Mariya hit back at Nasheed over allegations over 39,000 of his supporters were removed from MDP’s membership in an attempt to rig the upcoming primary.

“If all eligible voters this time are people who do not support him, then why is he contesting in the primary? I wonder,” she said.

Mariya said that during the previous administration, people who gathered at the MDP Haruge just to eat ‘bondibaih’ – a local dish – were jailed.

This has become history with President Solih’s administration, she said.

“Look at how different this party is. President Ibrahim Mohamed Solih has the same powers President Yameen had. But if we don’t understand and acknowledge this, we will lose what we achieved in 2018,” she said.

MDP is set to hold its presidential primary on January 28.

'People will begin living in our flats this year'