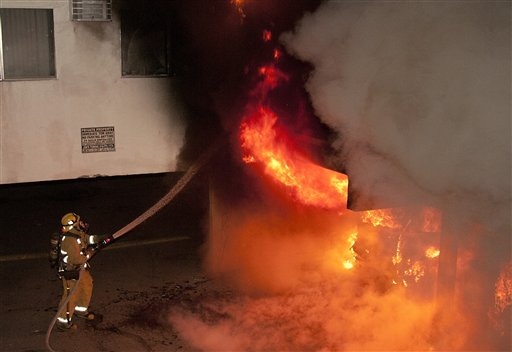 LOS ANGELES (AP) — Four more suspected arson fires broke out early Monday in the Los Angeles area as detectives searched for a man caught on grainy surveillance video near the scene of one of dozens of the suspicious car fires that have hit city since last week.

Police distributed DVDs on Sunday featuring footage of the person of interest, a white man between 20 and 30 years old with a receding hairline and a shoulder-length ponytail. The man is wanted for questioning in connection with the rash of arson blazes, said Officer Sara Faden.

He was seen on video Saturday after emerging on foot from inside an underground parking structure on Hollywood Boulevard where a car fire was reported.

Faden said investigators are asking for the public's help in identifying the man.

Department spokesman Capt. Jaime Moore told The Los Angeles Times that the blazes were in the Hollywood Hills and Laurel Canyon areas.

Detectives spent Sunday analyzing security video camera footage and following up on other leads after a half-dozen more vehicles were set on fire on New Year's Eve.

The outbreak of arson fires has left a trail of smoldering debris in Hollywood, West Hollywood, North Hollywood and the Fairfax district of Los Angeles since Thursday.

Authorities said they were investigating a total of 43 suspicious fires. Most of those fires were set in parked cars. In several cases, flames have jumped to carports and apartment units.

A reward of $60,000 has been offered for information that leads to the arrest and conviction of the arsonist.

Detectives served a search warrant at a home in the San Fernando Valley, Det. Gus Villanueva said Sunday. Several interviews were conducted, but no arrests were made.

Authorities haven't said how the car fires were sparked or what was collected at the crime scenes. They were unsure if the rash of fires were the work of one arsonist or multiple people or copycats.

There have been no injuries.

Firefighters routinely are called to put out burning cars, but this recent spate has been unusual because of the frequency and location of the fires. Police urged residents to check their cars for any signs of tampering and take simple precautions such as locking their cars, keeping garage and carport lights on at night and reporting suspicious activity.