Donors pledge millions to get Ukraine through winter, bombs 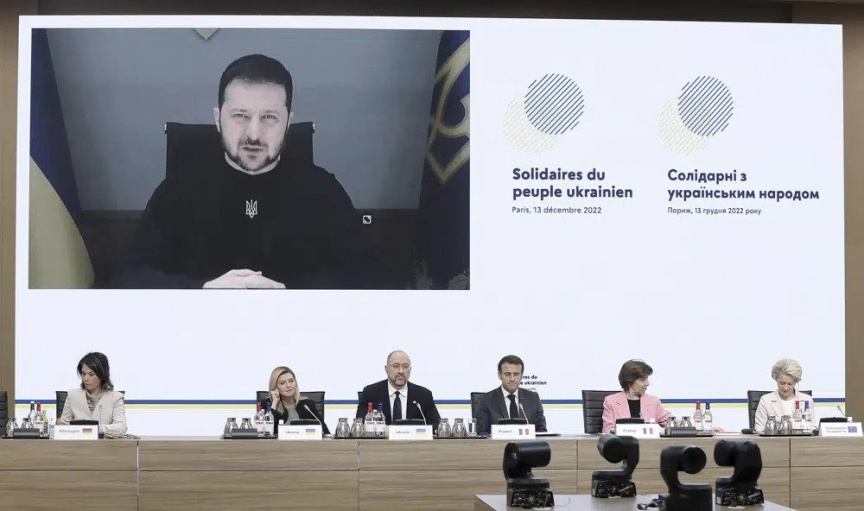 An international donor conference in Paris quickly racked up substantial promises of financial and in-kind support, a defiant response to sustained Russian aerial bombardment of critical infrastructure that has plunged millions of Ukrainian civilians into deepening cold and dark.

More military aid is also on the way. U.S. officials said Tuesday the Pentagon is poised to approve sending a Patriot missile battery to Ukraine, agreeing to an urgent request from Ukrainian President Volodymyr Zelenskyy who is desperate for more robust weapons to shoot down incoming Russian weapons. The approval is likely to come later this week and could be announced as early as Thursday, said three officials, who spoke on condition of anonymity because the decision is not final and has not been made public. Providing Patriot surface-to-air missiles could mark an escalation in the conflict.

French President Emmanuel Macron, the conference host, denounced the bombardments as war crimes, asserting that Moscow had resorted to pounding civilian infrastructure because its troops suffered setbacks on the battlefields.

Russia “has chosen a cynical strategy, aiming to destroy civilian infrastructure in order to put Ukraine on its knees,” Macron said. “The objective is clear: Respond to military defeats by spreading terror among civilians, try to break the back as it can’t maintain the front.”

As temperatures plunge and snow falls, Ukraine’s needs are huge and pressing. Since Russia began hitting the power grid and other critical infrastructure in early October, successive waves of cruise missiles and exploding drones have destroyed about half of Ukraine’s energy infrastructure, the Kyiv government has said.

Ukraine’s prime minister has alleged Russia is trying to pressure Europe by creating a mass exodus of Ukrainian refugees like the one early in the war. Russia says its military aim in destroying infrastructure is weakening Ukraine’s ability to defend itself and disrupting flows of Western weapons to the country it attacked in February.

The invasion has left many tens of thousands of people dead or injured and forced an estimated 6.5 million Ukrainians from their homes.

Zelenskyy, who addressed the Paris conference by video, said some 12 million Ukrainians — roughly one-quarter of the pre-invasion population — are living with power outages.

The Ukrainian president argued that a concerted international effort to keep Ukraine’s utility systems working could help dissuade Moscow from further attacks and potentially force it to the negotiating table, as well as prevent more Ukrainians from fleeing.

The Kremlin showed no signs of backing down. Spokesman Dmitry Peskov on Tuesday rejected an appeal Zelenskyy made the day before for Russia to start a pullback from Ukraine at Christmas, saying “there can’t be any talk about it” until the Kyiv government recognizes the Kremlin’s territorial claims.

“Without taking those realities into account, any movement forward is impossible,” Peskov said.

Donors offered an array of help — from light bulbs, generators and power transformers to assistance with food, water, health, transport and rebuilding. France’s Foreign Ministry said 1.05 billion euros — the equivalent of $1.1 billion — in financial and in-kind aid was pledged, all of it expected to reach Ukraine over the toughest winter months.

Without reliable power and other essential services, life for many is becoming a battle for survival.

“We need everything,” said Yevhen Kaplin, who heads Proliska, a Ukrainian humanitarian group providing cooking stoves, blankets and other aid.

With “the shelling, the missiles strikes and strikes on the infrastructure, we can’t say whether there will be gas tomorrow. We can’t predict whether to buy gas stoves,” he said. “Every day the picture changes.”

Ukrainians offered a glimpse into their winter hardships on Tuesday. Although Russian troops retreated from the Kyiv region months ago, many people still cannot return home because of Russian missile damage.

“We live like homeless here,” Hanna Reznikova, 63, said as she stood in Borodyanka, a town northwest of the capital where the Russian invasion turned apartment buildings into charred, bombed-out hulks.

Wrapped in a thin black coat, she said the temperature inside her building was the same as outside. The room where she lives with her partner is almost always cold due to rolling blackouts and no gas. To keep the room warm, Reznikova uses a blanket to cover the entrance. For light, she keeps a candle near the bed.

“It’s difficult and sad. But what can we do? This is how we will survive,” she said.