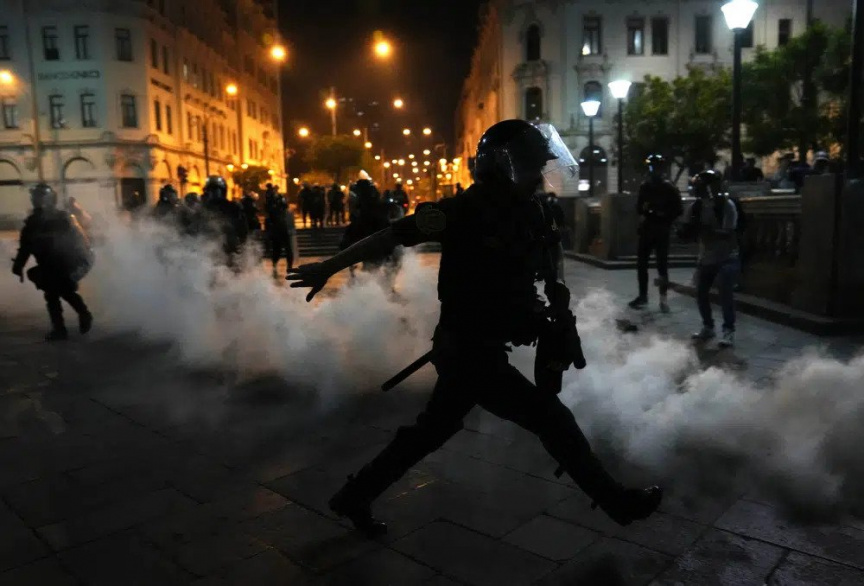 LIMA, Peru (AP) — Thousands of demonstrators took to streets around Peru for another day Sunday to demand new President Dina Boluarte resign and schedule elections to replace her and Congress, and at least two deaths were reported amid the protests.

Many of those demonstrating in the ongoing political crisis are demanding the release from custody of Pedro Castillo, the center-left president ousted Wednesday by lawmakers after he sought to dissolve Congress ahead of an impeachment vote.

Hundreds of people also protested in Lima, the capital, where riot police used tear gas to push protesters back.

The protests rocking Peru heated up particularly in rural areas, strongholds for Castillo, a former schoolteacher and political newcomer from a poor Andean mountain district. Protesters set fire to a police station, vandalized a small airport used by the armed forces, and marched in the streets.

A 15-year-old boy died of an injury suffered during a protest in the remote Andes community of Andahuaylas, Congresswoman Maria Taipe Coronado said as she made an impassioned plea from the legislative palace for Boluarte to step down.

“The death of this compatriot is the responsibility of Mrs. Dina for not submitting her resignation,” charged Taipe, who is affiliated with the party which helped Castillo and Boluarte to their election last year as president and vice president respectively before both were kicked out of that party. “Since when is protesting a crime?”

Taipe charged that authorities were using heavy-handed repressive tactics in quelling demonstrations. But it remains unclear how the boy was fatally injured, and state media reported a second death in the same community without giving details.

Anthony Gutiérrez, director of a local hospital, told a radio station that the second protester to die was an 18-year-old person. At least 26 people also were reported injured.

Boluarte, 60, was swiftly sworn in at midweek to replace Castillo, hours after he stunned the country by ordering the dissolution of Congress, which in turn dismissed him for “permanent moral incapacity.” Castillo was arrested on charges of rebellion.

Castillo’s failed move against the opposition-led Congress came hours before lawmakers were set to start a third impeachment attempt against him.

Scattered protests around the country have continued for days.

On Saturday in Andahuaylas, 16 people were treated for concussions at a hospital, and one of thos persons was was reported in serious condition.

Boluarte has called for a time of national unity to heal from the latest upheaval.

“The life of no Peruvian deserves to be sacrificed for political interests,” Boluarte tweeted Sunday following Taipe’s speech in Congress. “I express my condolences for the death of a citizen in Andahuaylas. I reiterate my call for dialogue and to put an end to violence.”

Meanwhile, in Lima, hundreds of people again gathered outside the legislative palace on Sunday. Dozens of police officers in riot gear used tear gas against those gathered, while just inside the building, lawmakers were beginning a session. Police also chased and beat protesters as they ran from the scene amid clouds of gas.

Prime Minister Pedro Angulo said Boluarte’s Cabinet would be meeting Sunday night to evaluate the civil unrest and determine how to respond.

Peru has had six presidents in the last six years, including three in a single week in 2020 when Congress flexed its impeachment powers.

The power struggle in the country has continued as the Andes region and its thousands of small farms struggle to survive the worst drought in a half-century. The country of more than 33 million people is also experiencing a fifth wave of COVID-19 infections — having recorded about 4.3 million infections and 217,000 deaths since the pandemic began.

Libyan accused in Lockerbie bombing now in US custody