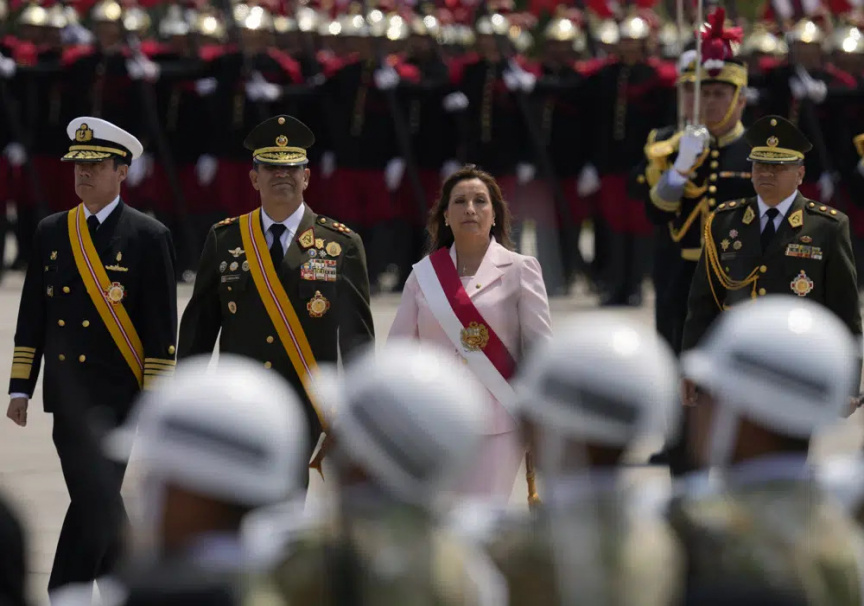 LIMA, Peru (AP) — Peru’s first female president appeared in a military ceremony on national television on Friday in her first official event as head of state, an attempt to cement her hold on power and buck the national trend of early presidential departures.

In an indication of continued political rancor, some politicians already were calling for early elections, and more protests were planned.

Dina Boluarte was elevated from vice president to replace ousted leftist Pedro Castillo as the country’s leader Wednesday. She has said she should be allowed to hold the office for the remaining 3 1/2 years of his term.

Boularte addressed members of the armed forces during a ceremony marking a historic battle. Boularte, flanked by the leaders of the judiciary and Congress, sat among lawmakers who had tried to remove Castillo from office.

“Our nation is strong and secure thanks to the armed forces, the navy, the air force, and the army of Peru,” Boularte said before hundreds of members of the armed forces in Peru’s capital. “They give us the guarantee that we live in order, respecting the constitution, the rule of law, the balance of powers.”

After being sworn in as president Wednesday, Boluarte called for a truce with legislators who dismissed Castillo for “permanent moral incapacity,” a clause of the constitution that experts say is so vague that it allows the removal of a president for almost any reason. It was also used to oust President Martín Vizcarra, who governed from 2018-2020.

Peru has had six presidents in the last six years. Boluarte is a 60-year-old lawyer and political neophyte.

She quickly began to show herself in public working as Peru’s new head of state. She met with groups of conservative and liberal lawmakers at the presidential palace. Before that, she danced an Andean dance after watching a Roman Catholic procession of the Virgin of the Immaculate Conception.

Analysts predicted a tough road for the new president.

A Boluarte government “is going to be very complicated, if not impossible,” said Jorge Aragón, a political science professor at Peru’s Pontifical Catholic University.

Former President Ollanta Humala, who governed from 2011-2016, noted that the new leader was not involved in politics or government before becoming vice president.

“She does not have the tools to govern,” Humala told N. television. He predicted that any truce with Congress “will last a month or perhaps more, but then the great problems of the country come upon her.”

The governor of the Cusco region, Jean Paul Benavente, demanded that the new president call an early vote, saying that would offer a “solution to the political crisis of the country.”

In the streets, small demonstrations by Castillo supporters continued in the capital and others parts of Peru, including Tacabamba, the district capital closest to Castillo’s rural home. Protesters demanded that the ousted leader walk free, rejected Boluarte as president and called for Congress to be closed.

In Lima, protesters trying to reach the Congress building have clashed with police, who used sticks and tear gas to push them back, and more protests were planned for Friday.

“The only thing left is the people. We have no authorities, we have nothing,” said Juana Ponce, one of the protesters this week. “It is a national shame. All these corrupt congressmen have sold out. They have betrayed our president, Pedro Castillo.”

Ex-cop who kneeled on Floyd’s back gets 3.5-year term